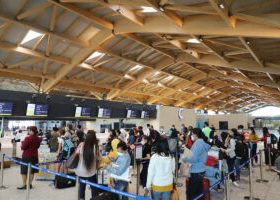 “The process of establishing our first-ever sovereign wealth fund is under way,” Mr. Marcos said at the WEF Country Strategy Dialogue in Davos, Switzerland, based on a video posted by Radio Television Malacañang.

Mr. Marcos said the proposed wealth fund is “one tool among many in our efforts” to diversify the Philippines’ financial portfolio, “which includes our existing institutions pursuing investment that will generate stable returns.

It will also have “welfare effects spanning employment creation, improvement of public service, and a decrease in costs of economic activities,” he added.

House Speaker Ferdinand Martin G. Romualdez said in a separate statement there was “huge interest” in the proposed wealth fund from WEF attendees.

The House of Representatives in December approved the bill creating the fund, but no counterpart measure has been filed in the Senate.

“It is unfortunate that the President himself talked about a fund that is yet to be deliberated by the Senate,” Enrico P. Villanueva, senior economic lecturer at the University of the Philippines Los Baños, said in a Twitter message.

Mr. Marcos’ move shows disregard for the democratic process, he added. “It will be hard to attract investors if the Executive branch cannot follow basic protocol and governance standards.”

If approved, the sovereign wealth fund named Maharlika will be used to “invest in a wide range of outlets” including foreign currencies, fixed-income instruments, domestic and foreign corporate bonds, commercial real estate, and infrastructure projects, according to the Budget department.

The $1.34-billion Maharlika Investment Fund (MIF) is expected to finance big government projects such as power grids and dams. Its main funders are government banks, after a backlash against a proposal to tap pension funds.

Maharlika Investment Corp., the state firm that will manage the fund, will be headed by the Finance secretary.

Maria Ela L. Atienza, who teaches political science at the University of the Philippines, said the premature launch of the sovereign wealth fund is a “display of power” meant to pressure senators into approving the proposed law.

“It is interesting to see how senators will respond,” she said in a Viber message. “Will they readily capitulate and therefore show publicly that the Senate is a mere rubberstamp of the president or will there be senators who, for either personal reasons and political ambitions or principles, respond in defiance?”

Critics of the fund have cited the government’s widening budget deficit and ballooning debt, which hit a record of P13.644 trillion at the end of November.

“Investors are no fools,” Leonardo A. Lanzona, who teaches economics at the Ateneo de Manila University, said in a Facebook Messenger chat. “They know that there is no substantial basis or source for setting up these funds.”

Mr. Lanzona said investors are aware the wealth fund is still being discussed in Congress.

“We have many projects that need funding such as infrastructure projects… Now, if we have such a fund, we can use it to fund these projects,” he said.

7% GROWTH THIS YEAR
Meanwhile, the Philippine economy will probably grow about 7% this year, according to Mr. Marcos. He said the nation could weather a dimmer global outlook to come up with what could be the fastest expansion in Asia.

“There is so much space, room to grow, in the sense that we are starting very many new things now,” Mr. Marcos said in an interview with Bloomberg Television’s Haslinda Amin on the sidelines of the WEF in Davos.

The economy has been “rather stable” and unemployment is continuing to decline, he said. Mr. Marcos said the domestic economy “will be able to manage at least 7% growth for last year” and expand by a similar pace in 2023.

Mr. Marcos has faced numerous economic challenges in his first six months as the country’s leader, including tight public finances and rising borrowing costs. Soaring prices of essential goods from sugar to onions have driven inflation to a 14-year high and Mr. Marcos, who heads the Agriculture department, has said farm production would be ramped up to rein imports and prices.

“The long-term solution of course will be to increase production. That is what we are working on,” the Philippine leader said. He added that his government has “started to rationalize the system because illegal imports have been a problem.”

Mr. Marcos also spoke about geopolitical tensions during interview, where he said trying to break an “impasse” with Beijing on South China Sea oil exploration talks was “a difficult thing.”

“We may find a way around that if we limit it to exploration, and hopefully, I think there’s still some give and take possible there,” the president said.

Like most in Southeast Asia, Mr. Marcos has sought to balance interests between the US and China. He has tried to cooperate with China in agriculture and infrastructure and met with President Xi Jinping earlier this month, agreeing to pursue South China Sea energy exploration talks.

Tensions between Manila and Beijing in the disputed sea have risen recently, with the Southeast Asian nation expressing “great concern” over Chinese vessels massing off its western coast. China is building up several unoccupied land features in the South China Sea, Bloomberg News reported in December.

Mr. Marcos said he would not concede the Philippines’ territorial claims in the disputed sea. “That is the red line. That’s something that will not move and it’s something that we cannot cross because it’s a very slippery road from there.”

He also said the US has committed to give security support in the South China Sea. “When there are certain reports that come in, some of the American ships come down and make their presence felt. We were hoping that we keep and maintain that at that level.” — Kyle Aristophere T. Atienza and Bloomberg