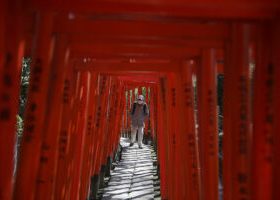 HONG KONG — A Macau court sentenced a top gambling boss to 18 years in prison after he was found guilty of 162 charges, including enabling and operating illegal gaming, public broadcaster TDM reported on Wednesday.

Alvin Chau was chairman of Macau’s Suncity junket operator — which brokered the gambling activity of Chinese high rollers — until December 2021, a month after his arrest.

The sentence marks a dramatic turnaround for the businessman, who was also found guilty of fraud and of running a criminal syndicate, and who once presided over the gambling hub’s VIP industry.

Mr. Chau denied all wrongdoing during his two-month trial, which was watched closely by many in the former Portuguese colony, where he has a celebrity-like status.

Macau is the only city in China where citizens are permitted to gamble in casinos. Tax revenues from its casinos account for more than 80% of government income.

Chau’s lawyers had argued that he did not operate any illegal gambling or commit money laundering and that his business in the Philippines was permitted by local authorities there. No one from Suncity Group had promoted gambling on the mainland, his lawyers said.

Junket operators help facilitate gambling for wealthy Chinese in Macau, extending them credit and collecting on their debt on behalf of casino operators. Marketing or soliciting gambling in mainland China is illegal.— Reuters

Mr. Chau’s Suncity was a major player in Macau until 2019, before prior the coronavirus outbreak, accounting for about 25% of total gaming revenues, industry executives said.

The junket industry has collapsed in the former Portuguese colony since Mr. Chau’s arrest, with all of Suncity’s VIP rooms shuttered. Many other operators folded, hurt by poor sentiment and a lack of business due to COVID-19 related travel restrictions.

Junkets are now only allowed to partner with a single casino; before they could work with as many as they wanted with little oversight.  — Reuters