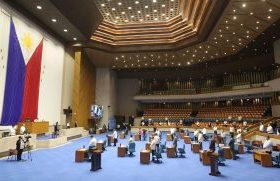 THE GOVERNMENT upsized the volume of the Treasury bonds (T-bonds) it awarded on Tuesday amid strong demand as investors were looking for high-yielding instruments to park their cash.

The Bureau of the Treasury (BTr) raised P49 billion from the reissued 20-year papers on Tuesday, higher than the original P35-billion program, as bids for the offering reached P133.947 billion.

It was also 54.45 bps lower than the 7.0695% quoted for the same bond series but 10.2 bps higher than the 6.423% seen for the 10-year tenor at the secondary market prior to the auction, based on PHP Bloomberg Valuation Service Reference Rates data provided by the BTr.

“The Auction Committee decided to fully award the reissued 20-year Treasury bonds (FXTN 20-25) at today’s auction… The bonds were 3.8 times oversubscribed, attracting P134 billion in total tenders compared with the P35-billion offering, which prompted the committee to double the allocation for non-competitive bids,” the BTr said in a statement on Tuesday.

“With its decision, the Committee raised P49 billion, bringing the total outstanding volume for the series to P76.6 billion,” it added.

A trader said in a Viber message the offer was met with strong demand as the market is looking for investment outlets yielding above 6%.

“Investors tried to catch up with the recent rally… [there was] fear of losing an opportunity to invest,” the trader said.

Mr. Ricafort added that the issue’s average rate eased on expectations of slower tightening by both the US Federal Reserve and the Bangko Sentral ng Pilipinas (BSP) following dovish signals from officials and slower US consumer inflation in December.

The US consumer price index (CPI) slipped by 0.1% last month, the first decline since May 2020 and coming from a 0.1% rise in November.

The data bolstered bets that the Fed will deliver smaller rate hikes as early as its first meeting for the year, which will be held from Jan. 31 to Feb. 1.

The BSP hiked rates by 350 bps in 2022 in its fight against inflation.

The BTr plans to raise P200 billion from the domestic market in January, or P60 billion through Treasury bills and P140 billion via T-bonds.

The government borrows from domestic and external sources to finance its budget deficit, which is capped at 6.1% of gross domestic product this year. — A.M.C. Sy