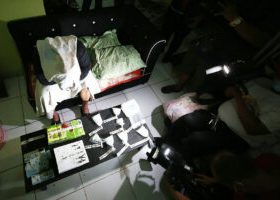 UN told to probe rights abuses in the Philippines

“This major boost on our wind farm’s financing from Asia and the Pacific’s climate bank and ACEN’s long-standing financing partner, ADB, and our other parallel lenders will help catalyze renewable energy build-up capacity by 2030,” said Patrice R. Clausse, chief executive officer of ACEN’s international operations, in a media release on Tuesday.

The 88-MW wind farm adds to ACEN’s operating wind projects in Vietnam, which have a capacity of 420 MW.

The Ninh Thuan wind farm started commercial operations in 2021. It is expected to generate about 339 gigawatt-hours (GWh) of renewable energy per year, which can avoid 215,000 tons of carbon dioxide (CO2) emissions.

According to the media release, energy demand in Vietnam continues to grow and it is necessary to meet the demand with renewable energy.

The media release quoted ADB’s regional official as saying that the project is a crucial step for Vietnam’s resilience and recovery by further expanding its renewable energy mix and contributing to its net-zero targets.

“Energy demand in Vietnam has grown rapidly even during the pandemic, and it is crucial that this demand be met through clean energy that will drive sustainable economic growth,” said Jackie B. Surtani, ADB private sector operations department infrastructure finance division director for East Asia, Southeast Asia, and the Pacific.

ACEN said that ADB will also grant the Ninh Thuan wind farm an additional $5 million from the Goldman Sachs and Bloomberg Philanthropies-backed Climate Innovation and Development Fund, which will fund its environmental initiatives.

The company described BIM Group as a private conglomerate in Vietnam with activities in real estate, renewable energy, aquaculture and food, consumer and lifestyle.

The wind farm is part of ACEN’s target to expand its renewable energy capacity to 20 gigawatts by 2030.

At the local bourse on Tuesday, shares in the company closed 29 centavos or 4.12% lower to end at P6.75 apiece. — Ashley Erika O. Jose