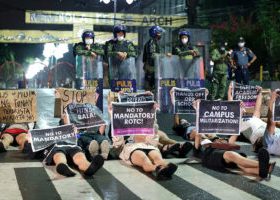 ON THE evening of Dec. 30, 2022, Maria Ozawa poured tequila down my throat. For a few seconds, I lived a fantasy held onto by thousands of teenage boys in the early 2000s who worshipped the Japanese adult film star.

Maria Ozawa was in town on the penultimate day of 2022 as an ambassador for Mansion Sports Bar, a noisy new club in Makati that seemed to shake up one of the quieter streets in Makati’s Legaspi Village.

Ms. Ozawa isn’t new to the club scene: according to her, she has two lounges in Manila; one in Makati, and another in Manila’s Port Area. She also owns a bar in her native Japan.

In 2005, Maria Ozawa began her journey as the queen of smaller screens: watched in secret by boys of all ages. The Canadian-Japanese star awakened their sexuality as she performed stunt after stunt on camera. She left the industry around 2009, having performed also in some mainstream Japanese films. She appeared in some mainstream films in Southeast Asia at the beginning of the 2010s. To her recollection, she entered the Philippines in 2015, dipping her fingers in the Manila showbiz scene, shooting films with action stars Cesar Montano and now-Senator Robin Padilla. Up until 2022, she had been dating Filipino actor, model, and chef Jose Sarasola.

While the pandemic had kept her in Japan, she has traveled back and forth between the countries since travel restrictions have been lifted.

When BusinessWorld met her, Ms. Ozawa was wearing a white halter dress with a neckline held up by chains. She displayed an almost-girlish innocence and enthusiasm, and spoke with a high, charming voice. She discussed the reasons why she left the adult film industry. “That was a long time ago. Around 2009 or 2010,” she pointed out.

“I’ve accomplished my dream. I know that that industry isn’t an industry that you can do forever. Not for long-term,” she explained.

“When I started this, I wanted to be famous, and I wanted to change the inspiration and the thinking about the industry itself. I did — then I won an award,” she said.

If Ms. Ozawa’s recollections about leaving the industry are correct, she left the industry near the time she won at the 2009 AV Grand Prix, a Japanese award-giving body for the adult film industry (called the AV, as in “adult video,” in Japan). In that year, one of her films won the Best Violence Video Award and another, Oral Venus, won a special award in the Featured Actress Video category.

“I think that was the time when I thought, ‘If I quit, would I still be famous?’ People would be like, ‘Where did she go? What happened to her?,’ rather than just continuously doing [films] until they forget about you. A fast decision, I think,” she told BusinessWorld. “Luckily, I was well-known in other countries.”

LESS STRESSWe asked her about the difference between being famous on small screens and big mainstream ones. “Totally different,” she said, though the answer is less about the different kinds of fame but more about a nation’s culture. “I guess it’s like which country you work (in). In Japan, any celebrity, whatever the type is, it’s very, very hard to work there compared to the Philippines,” she said.

“I’ve done it both. Working here in the Philippines is so much less stress. Easier — in a good way. Everybody’s very supportive, and people just — their backup, their hospitality, is something very different from Japan. I’m not saying Japan’s mean, but it’s just a culture thing. I think people here in general are nicer,” she said.

“Except for the traffic, I love everything.”

She talked about going off-camera: not just from adult films, but from being what we called a “movie movie” star. She found the term amusing and repeated it. “Now I know how the staff felt, and how hard it is to work in the back,” she said with laughter. “But then, I think I enjoy being in this situation better than always being in the camera. Or the artist’s side. I think in the long term, I think it’s so much easier to work in this business management thing because you could gather up with people, meet new people, and then there’s so many work opportunities which I love,” she said.

“Sometimes I think about it. I wonder how it is now. I don’t know how they film it now. I would like to visit a studio one day and compare. I’m sure everything’s getting better with all the techniques, right? It will be nice if I can go visit.”

She did go further about the advantages of life off-camera. “Relaxing. No pressure. I can do whatever I want, anytime I want. There’s no camera following you 24/7.”

But “I miss acting,” she said about her mainstream career. “I do, but then — secret — I’m also really good at acting on the movie movies. I look at myself on the big screen and I’m like: ‘Oh my God! I couldn’t believe it! It’s really me!’”

FINDING ROMANCEMs. Ozawa has found love again: we mentioned her breakup with the Filipino celebrity Mr. Sarasola, but now, she says she’s dating a man from Japan. “Yes!” she responded to a question about dating again. “You’re not giving up,” she quipped.“He’s Japanese. Since I went back to Japan, it’s just so much easier. If you’re in that country, it’s so much easier,” she said.

“I always had this thing about romance about foreign people — they’re more romantic than Japanese people. Because of the culture — they open doors for you, roses, dates, everything. These small things,” she explained. “But when I go back to Japan, I feel relaxed also, because we talk in the same language; Japanese or English. Whereas here, when I was living here, I had trouble, because I couldn’t speak Tagalog.”

“I tried to learn, but since people are so good in English — you guys are so smart — I got lazy.”

INFLUENCESince Ms. Ozawa left the industry, adult film stars and their lives are entering mainstream conversation. She wouldn’t be the first one to have a career off-camera: we’ve read about adult stars becoming sommeliers, or musicians, or artists. On another note, amateur performers also hit audiences more easily thanks to adult websites that allow one to upload their own content, and even earn a living through platforms like OnlyFans.

In response to a question about her work influencing the mainstreaming of adult film stars and its culture, she agreed, “I think so.”

“I think it’s good and bad in both ways. Of course, it’s the industry where I was in before, so I couldn’t say anything bad about it. But then, I think, if you want to continuously do that industry, you really have to think it through,” she said.

“I’ve been telling lots of people, like younger girls: just don’t do it for the heck of it, or because of the money. People will regret it. It’s going to be there forever, and it might ruin your future life,” she warned.

“What I tell them is: do it if you really want to, but never do it because of someone else. Do it because you really, really thought about it,” she said.

“Don’t give up on your dreams. I hope people will look at me and think differently about the industry. I never gave up on my dreams before. I had so much trouble when I was younger. But I just kept going.”

“And this is where I am. I want to tell people: never give up.”