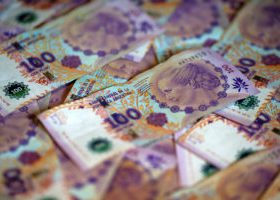 ‘The paycheck has died’: Workers hold funeral for wages

An offshore company linked to Michelle Mone and her husband bought a £7.5million private jet months after they allegedly made tens of millions from a public PPE contract, it was claimed last night.

The Tory peer and lingerie tycoon, nicknamed ‘Baroness Bra’, has vowed to clear her name after a newspaper reported that leaked documents showed she and her children received £29million after referring a company called PPE Medpro for contracts for masks and gowns.

The firm was awarded £203million to supply equipment after she recommended it to ministers in the early days of the pandemic.

Since spring 2020, Baroness Mone and her husband, Doug Barrowman, have also splashed out on an £80,000 racehorse, which she bought for him as a wedding gift, and £3million of property for her children, The Guardian newspaper reported.

The couple held a lavish wedding at their multi-million-pound Isle of Man estate, an event which was splashed across the pages of Hello! celebrity magazine.

Lady Mone also posted on Instagram a picture of herself and Mr Barrowman on the Lady M yacht, believed to have been bought in May 2021 for around £6million.

There is nothing to link the alleged windfall from PPE Medpro with their luxurious lifestyle. But the timing of their spending will increase scrutiny on Baroness Mone and her husband.

The Lords standards watchdog is investigating the peer over her alleged links with PPE Medpro, although this has been paused pending a ‘criminal investigation’ into the firm.

Baroness Mone has consistently denied any ‘role or function’ in the company, and her lawyers have previously said she was ‘not connected to PPE Medpro in any capacity’.

This week the Daily Mail has revealed she had ‘aggressively’ lobbied Matt Hancock, then health secretary, to try to promote a second company that he claimed she had a ‘commercial interest’ in.

It was alleged the firm was LFI Diagnostics – a ‘secret entity’ of the family office of her husband. A source close to Baroness Mone denied the claim.

This week Rishi Sunak told the Commons it was ‘absolutely right’ that the Tory peer was taking a leave of absence from the Lords.

Speaking at Prime Minister’s Questions, he said: ‘Like everyone else I was absolutely shocked to read about the allegations.

‘It’s absolutely right that she is no longer attending the House of Lords and therefore no longer has the Conservative whip.’

Ministers have committed to release documents to MPs surrounding the award of £203million of contracts to PPE Medpro.