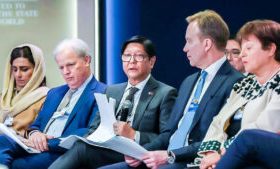 A PRODUCTION that celebrates the work of two living National Artists for Dance — Alice G. Reyes and Agnes D. Locsin — will attempt to encapsulate more than 50 years of Philippine dance and make a stand about its future.

Pulso Pilipinas II: Alay nina Alice at Agnes will see the Alice Reyes Dance Philippines (ARDP) performing alongside underprivileged youth from different regions in a program composed of Ms. Reyes’ Carmina Burana, a feat of athleticism and stamina that matches the musicality and monumentality of German composer Carl Orff’s cantata; and Ms. Locsin’s Igorot, Moriones, and Elias at Salome, a trio of works that show off the range of the pioneering neo-ethnic choreographer known for her angularity, percussive power, and groundedness.

Accreted time and accolades have turned these dances into masterpieces but they were revolutionary — controversial, even — when they were first staged and their choreographers, iconoclasts instead of the icons they are now.

“People like to put things in boxes,” said Ms. Reyes at an open rehearsal in the Cultural Center of the Philippines this July. “Should you step out of these boxes and do something else, people … don’t know how to deal with it.”

‘A HAPPY SOLUTION’Carmina Burana, like the rest of Ms. Reyes’s oeuvre,incorporates different dance vocabularies: where ballet has pointe shoes, modern dance has bare flexed feet; where ballet desires to escape gravity, modern dance is enamored of it.

The ability to do both is the hallmark of a dancer who has been trained by Ms. Reyes and her protégés. Celebrated today, the combination of techniques was questioned then. “People thought I was doing something really stupid because I was doing modern and classical ballet. They thought it was odd,” she said. “And now you won’t find a ballet or dance company that doesn’t do that — even in Russia.”

The last is a veiled reference to the rift between Ms. Reyes and Ballet Philippines (BP), the company she founded in 1969. (See “Copyright fight: Ballet Philippines risks losing ‘treasure trove’ of dance” https://www.bworldonline.com/arts-and-leisure/2022/06/15/454889/copyright-fight-ballet-philippines-risks-losing-treasure-trove-of-dance/ ).

At a masterclass on copyright organized by BP this August, Lorna P. Kapunan, the company’s legal adviser, advised diplomacy: “The more important thing here is the viewing public. Let’s not deprive the public of good creations. …  The public benefits from the parties not quarreling whether it’s Ballet Philippines, Alice Reyes, or CCP. The constitution says that intellectual property must have a social function. To me, the social function of art is to bring happiness and not discord to people. Perhaps Ballet Philippines, CCP, and Alice Reyes should sit down and come up with a happy solution.”

BASTARDIZATION, VINDICATIONMeanwhile, Ms. Locsin, who once dressed women in G-strings as they portrayed gender-bending roles (a necessity since she lacked male dancers), was accused of bastardizing and appropriating indigenous dances when her neo-ethnic pieces premiered. Igorot isinspired by dance rituals of the Mountain Province; Moriones,by the Moriones Festival of Marinduque.

“I never explained myself. The best answer to criticism is silence,” said Ms. Locsin in a Zoom call with BusinessWorld. Naysayers have dwindled over the decades, or have become smart enough to remain silent themselves.

When pressed, Ms. Locsin has always said that she never wanted to supplant tradition. “This is my tribute to Philippine culture,” she said of her research-based choreography.

Vindication by way of being conferred the highest state honor for individuals who have done much for their artistic field is far from her mind. “Right now, this National Artist thing hasn’t sunk in,” she said, adding that she is concentrating on helping Ms. Reyes’ fledgling company.

“I want ARDP to continue and further Alice Reyes’ legacy,” she said. “Why make a new vision when her vision is there and it is good? There is room for all kinds of dances, room for growth.”

EPHEMERAL, OF THE MOMENTAlay nina Alice at Agnes is a rare jewel, given how few and far between National Artists are among those who toil in dance. Ms. Locsin, recognized this year, is only the 6th; Ms. Reyes, recognized in 2014, was the 5th.

The dearth of honorees — as compared to, say, those in the visual arts — might be explained by the nature of dance itself and the limits of video technology when Ms. Reyes, 79, and Ms. Locsin, 64, began their careers.

The momentousness of Alay nina Alice at Agnes as a moment in Philippine dance is not lost on the members of ARDP.

“We’re starting something new and we want to make an impression on the audience: this is who we are, we’re different from them, this is what we’re focused on,” said ARDP ballet soloist Monica A. Gana. Unnamed but out in the open in her reply is how ARDP compares to BP (“them”).

Added Ronelson P. Yadao, ARDP artistic director: “There is pressure and I can feel it. But Alice Reyes believes in the group and in me: that gives me confidence.”

The dancers have always been the priority of Ms. Reyes, who formed ARDP out of like-minded individuals who were displaced from various dance companies over the pandemic — and it is for them that she continues despite less-than-ideal circumstances: Zoom as the de facto means of communication, the lack of an office and studio, questions about copyright, and competing ideologies.

When Ms. Reyes staged her first modern dance concert at the CCP in 1969, she had the run of the place. “It was a different world. The CCP was ours. And now, there are different resident companies all wanting space, all with their own plans and programs,” she said. “You’re not going to get everyone to understand. There will always be those who prefer opera to BTS. There will always be those who prefer Swan Lake to Encantada or Amada.”