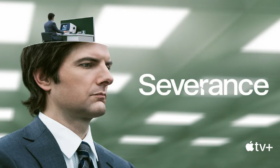 Severance and its harrowing take on work-life balance

TEAM US showing their trophy. — REUTERS

CHARLOTTE, NC — The United States was forced to work harder than expected to earn a ninth consecutive Presidents Cup on Sunday, taking down a scrappy International team that vowed to fight until the final bell.

Robbed of top players who defected to the Saudi-backed LIV Golf Series, the depleted Internationals were expected to be easy pickings for an American squad packed with nine players in the world’s top 15.

But the biennial showdown was far from the blowout predicted ending in a respectable 17-1/2 to 12-1/2 scoreline.

“And I’ll go to battle with them any day.”

The Internationals, with a record eight Presidents Cup debutants in their 12-man squad, kept the outcome in doubt until late into Sunday’s singles when Xander Schauffele beat Canada’s Corey Conners 1-up to register the winning point.

Needing 4-1/2 points from 12 singles matches to reach the winning total of 15-1/2, the US got the job done with five contests to spare sparking early celebrations among the 40,000 mostly American supporters at the Quail Hollow Club in Charlotte.

“We just wanted to get it done,” said Mr. Schauffele. “It’s always hard to win.

“Everyone else got their points up on the board.”

“It was close. It was stressful.”

Unable to match the US depth and quality Mr. Immelman challenged his player to go down fighting a call to action they took to heart.

What had looked like a rout after the US steamrolled through the opening two sessions on Thursday and Friday turned into a tight contest after the Internationals hit back in stunning style on a marathon Saturday, splitting the morning foursomes (2-2) and then taking three of four points in the afternoon fourballs.

While it was an inspiring performance from the Internationals, they still entered Sunday’s singles facing a daunting challenge of overhauling a US team with a comfortable four-point edge.

Still, the Internationals had the momentum going into the day, having planted the seeds of concern in the heads of their opponents, some of whom were spotted on the practice green late into the evening working on their putting under golf cart lights.

No one was more aware of the dangers lurking than US captain Davis Love III, who was also leader of the American squad at the 2012 Ryder Cup at Medinah when the Europeans climbed out of a similar four-point hole on the final day to snatch the trophy in what is still regarded as one of the greatest comebacks in golfing history.

I’ve been a part of, unfortunately, a lot of losing teams,” said Mr. Love. “There was a lot of different reasons to have pressure.

“But being the big, big, big favorite carries a little bit of weight. I’m glad they ignored it and just played great.”

Not wanting a repeat of that, Mr. Love opted to go for the early knockout top-loading his lineup with his best performers.

Justin Thomas and Jordan Spieth, who formed a perfect partnership going 4-0-0, were at the top of the order.

Thomas, who won his first of two PGA Championships at Quail Hollow in 2017, was first off to chants of “USA, USA” taking on South Korea’s Kim Si-woo.

But it was multiple major winner Mr. Spieth putting the first American point on the board the three-time major winner easing to a 4&3 win over Australian Cam Davis.

In the end, the early hole the Internationals had dug for themselves proved too big to escape Tony Finau taking down Canada’s Taylor Pendrith 3&1 to put the US on 14-1/2.

That left it to Olympic champion Mr. Schauffele to seal the deal, who drained a six-foot par putt on the 18th hole to clinch the Cup. — Reuters