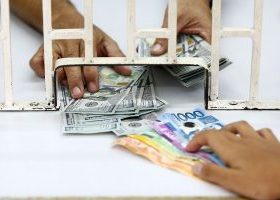 By Keisha B. Ta-asan

THE PHILIPPINE central bank would probably increase key rates further this year to protect the peso amid a hawkish US Federal Reserve, analysts said at the weekend.

The local currency would continue its free fall against the dollar if the Bangko Sentral ng Pilipinas (BSP) “lags too much” behind the Fed’s aggressive policy tightening, First Metro Investment Corp. and University of Asia and the Pacific (UA&P) said in a joint report.

“We expect another 25-basis-point (bp) [increase] before the end of the year if inflation remains above 6.5%,” they said.

The BSP raised key interest rates on Thursday for a fifth time this year to tame inflation amid a struggling peso. It increased its overnight borrowing rate by 50 bps to 4.25% effective Friday, and its corresponding lending rate to 4.75%, as predicted by 11 of 15 analysts in a BusinessWorld poll two weeks ago.

The move followed the Fed’s 75-bp hike and signals of larger increases to come that caused the peso and Philippine stocks to tumble.

The central bank has raised key rates by 225 bps since May versus the Fed’s 300 bps since March.

The peso closed at P58.50 a dollar on Friday from P58.49 a day earlier, based on Bankers Association of the Philippines data. It has weakened by 14.7% or P7.50 this year from its P51-a-dollar close last year.

“Federal Open Market Committee (FOMC) projections reveal that the Fed may bring it up further by another 100-125 bps to 4%-4.5% by yearend to ensure a more drastic inflation slowdown, even if some ‘pain’ sets,” First Metro and UA&P said in their report.

“With the Fed firmly bent on beating down inflation to its 2% long-term target, it may even bring the rate all the way to 5% by end-2023.”

“The central bank does not view current monetary conditions to be restrictive,” they said. “Rather, it believes that growth will remain ‘respectable’ and the economy is capable of absorbing additional rate hikes.”

“We forecast hikes of 25 bps each in the November and December policy meetings. However, the evolution of inflation, balance of payments and extent of further tightening by the US Fed may reshape our assessment,” ANZ added.

The BSP on Thursday raised its average inflation forecast for this year to 5.6% from 5.4%, exceeding its 2%-4% target for the year.

Makoto Tsuchiya, an assistant economist at Oxford Economics raised his inflation forecast last week to 5.6% this year from 5.4%.

He also expects inflation to ease to 4.1% next year, still above the central bank’s 2-4% target.

“Against a backdrop of ongoing elevated inflation and at least further 75-bp US rate hikes this year, we expect the BSP to raise rates by another 25 bps at its November meeting, bringing the policy rate to 4.5% at yearend,” he added.

Inflation climbed to 6.3% year on year in August from the nearly four-year high of 6.4% a month earlier and 4.4% a year ago. It was the fifth straight month that it exceeded the BSP’s 2-4% target this year.

“We expect an extended pause over 2023 as priorities shift back towards supporting growth amid a weak external environment,” Mr. Tsuchiya said.

Philippine economic output grew by 7.4% in the second quarter, bringing first-half growth to 7.8%, according to data from the local statistics agency.

The central bank will hold two more policy meetings on Nov. 17 and Dec. 15.

The peso will probably continue to weaken against the dollar this week as the market expects a more aggressive policy tightening by the US Federal Reserve until yearend.

PESO TRADEThe currency closed at P58.50 a dollar on Friday from  P58.49 a day earlier, P1.07 weaker than a week ago, based on Bankers Association of the Philippines data.

Dollars exchanged dropped to $985 million from $1.51 billion on Thursday.

The federal fund rate projected for end-2022 implies a 125-bp increase in the Fed’s two remaining policy meetings this year. Markets are pricing in another 75-bp rate hike at its November meeting.

“Clearly the Fed’s policies have affected our choices,” BSP Governor Felipe M. Medalla told Bloomberg Television on Friday. “We don’t want to match the Fed, at the same time we have to respond.”

“We clearly are intervening in the forex market,” he said. “One approach is to intervene more strongly because the volatility is actually now much higher.”

The other approach is to reduce local currency liquidity by borrowing more from the central bank’s weekly auctions so there will be less peso to chase dollars, he added.

Ruben Carlo O. Asuncion, chief economist at UnionBank of the Philippines, Inc. expects the dollar to continue strengthening unless the Fed drastically changes its tone.

He said the peso depreciates by about a peso for every 75-bp rate hike by the US central bank.

The BSP would probably limit its intervention in the foreign exchange market to avoid a sharp decline in dollar reserves, Mr. Asuncion said.

The gross international reserves hit $98.98 billion at the end of August, slipping by 0.85% from a month earlier and by 8.3% from a year earlier, according to BSP data. It was the sixth consecutive month of decline.