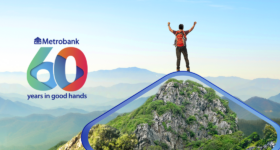 Metrobank at 60: A bank for all generations

THE SENATE blue ribbon committee has denied a request to drop a former budget official’s name from an immigration lookout bulletin over his alleged involvement in anomalies in pandemic supply contracts.

In a 10-5 vote, senators denied the request of Lloyd Christopher A. Lao, former head of the Procurement Service under the Budget department, Senator Francis N. Tolentino, committee chairman, told a hearing on Thursday.

The Justice department issues an immigration lookout bulletin order so Immigration officials can inform it if a so-called person of interest tries to leave the country.

In September 2021, the agency issued a lookout order against Mr. Lao after he was probed for his role in the award of a multibillion-peso contract to a local contractor of overpriced face masks and shields.

He was also being questioned for the agency’s purchase of outdated and overpriced laptops for public teachers worth P2.4 billion.

In a letter to Mr. Tolentino presented at an Aug. 25 committee hearing on the laptop controversy, Mr. Lao said the lookout an order against him should be lifted since there were no pending cases or arrest warrants against him.

Meanwhile, at Thursday’s hearing on the laptop contract, Senator Sherwin T. Gatchalian said the service fee paid by the Department of Education (DepEd) was not “worth the sloppy work” by the procurement agency.

The senator also asked why the procurement agency had paid P58,300 per laptop when the budget was supposed to be just P35,046.50.

Procurement Division officer-in-charge Sharon Y. Baile said the agency had taken into account the security services and other customization add-ons bundled with the laptops.

She added that the procurement agency had kept a master list of suppliers from past purchases. Mr. Gatchalian pointed out that suppliers might have been arbitrarily chosen since it was not clear how one could be in the master list.

“A lot of discretion was made in this process and it was not formalized in procuring these laptops,” he added. “In my opinion, the P69 million was not worth this sloppy work by PS-DBM. I would have thought with their experience, they would have perfected their work in procurement.” — John Victor D. Ordoñez