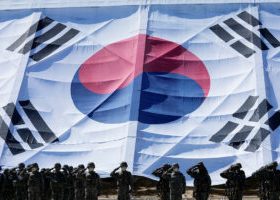 South Korea, US begin their largest military drills in years

LOPEZ-LED energy company First Gen Corp. said its unit’s liquefied natural gas (LNG) terminal in Batangas is expected to be completed by the first quarter of next year.

“This change is intended to acknowledge the historical, current, and future support given by the Province of Batangas and by our hosts Batangas City and to underscore our commitment to supporting the energy security of the Philippines,” said Jonathan Charles Russell, executive vice-president and chief commercial officer of First Gen.

FGEN LNG said the project will help ensure the energy security of the Luzon grid and the Philippines, “as the indigenous Malampaya natural gas resource continues to decline.”

According to a report from the Department of Energy (DoE), FGEN LNG’s terminal has a total capacity of 5.26 million tons per annum and an estimated construction cost of P13 billion.

The DoE said that 20% of the Philippines’ total power requirements, together with 27% of the Luzon grid, is provided by the Malampaya gas field. However, the Malampaya concession will expire in 2024, with its supply expected to reduce starting this year.