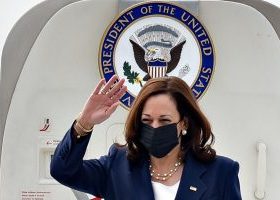 TAIPEI — Taiwan President Tsai Ing-wen’s special envoy met Pope Francis on Sunday and asked him to “pray for Taiwan,” on a trip the Taipei government has cast as a demonstration of their close relations even as the Holy See courts China.

The Vatican is Chinese-claimed Taiwan’s sole European diplomatic ally, and Taipei has watched with concern as Pope Francis has moved to improve relations with China. The democratically governed island has formal ties with only 14 countries, largely due to Chinese pressure.

Former Taiwan Vice President Chen Chien-jen, a devout Catholic visiting the Vatican for the beatification of former Pope John Paul I, wrote on his Facebook page late Sunday that he was “specially received” by Pope Francis before the ceremony.

“I conveyed President Tsai’s greetings to the pope and asked the pope to pray for the people of Taiwan. The pope responded with a smile and (said he) looked forward to praying for world peace together,” Mr. Chen added.

Mr. Chen went to the Vatican three times while in office, in 2016, 2018 and 2019, including attending the canonization ceremony of Mother Teresa.

Pope Francis told Reuters in July that while the Vatican’s secret and contested agreement with China on the appointment of Roman Catholic bishops is not ideal, he hoped it could be renewed in October because the Church takes the long view.

The deal, which was struck in 2018 and comes up for renewal every two years, was a bid to ease a longstanding divide across mainland China between an underground flock loyal to the pope and a state-backed official church.

Both sides now recognize the pope as supreme leader of the Catholic Church.

China’s constitution guarantees religious freedom, but in recent years the government has tightened restrictions on religions seen as a challenge to the authority of the ruling Communist Party.

Taiwan puts no restrictions on freedom of faith and has a thriving religious community that includes Christians, Buddhists and Muslims. — Reuters