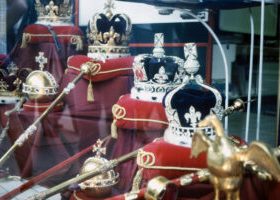 The Monarchy is Britain’s most successful (re)invention

SHARES declined on Monday amid continued fears of aggressive rates hikes from the US Federal Reserve and after the peso hit a new record low against the dollar.

“Philippine shares fell, without any leads as Wall Street is on a four-day trading week this week in observance of the Labor Day holiday on Monday,” Regina Capital Development Corp. Head of Sales Luis A. Limlingan said in a Viber message.

“There was also some overhang as the US sold down on Friday, with fears that the Fed would stay aggressive in hiking rates to combat inflation,” Mr. Limlingan said.

Philstocks Financial, Inc. Research Analyst Claire T. Alviar said in a Viber message that the PSEi dropped “as investors digest the depreciation of the peso to a record low and the rise of national debt to a record high.”

“So far, the peso remains at P56 levels but it is now trying to breach the P57 level amid the aggressive stance of the Federal Reserve. Meanwhile, some investors were on the sidelines… as investors await the release of August’s inflation rate,” Ms. Alviar added.

On Monday, after the stock market’s close, the local unit finished at a new all-time low of P56.999 against the greenback, with the peso touching the P57-per-dollar level intraday.

Meanwhile, the National Government’s debt rose by 0.8% to a record P12.89 trillion as of end-July, attributed to additional domestic and local borrowings, as well as the weaker peso.

On the other hand, a BusinessWorld poll of 13 analysts yielded a median estimate of 6.4% for August inflation, within the central bank’s 5.9-6.7% forecast.

If realized, August inflation would be unchanged from the 6.4% print seen in July which was the highest in 45 months or since the 6.9% print in October 2018.

The Philippine Statistics Authority is scheduled to release the latest inflation data on Sept. 6, Tuesday.

Value turnover decreased to P4.19 billion on Monday with 822.65 million shares changing hands from the P4.59 billion with 1.02 billion issues seen on Friday.