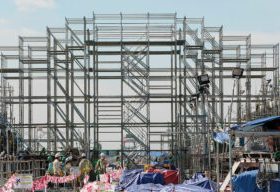 PORK PRICES in the Philippines will continue to climb this year, mainly due to the ongoing African Swine Fever (ASF) outbreak, more expensive animal feeds, and higher pump prices, according to MUFG Global Markets Research.

Inflation is expected to peak at 7% in November, she said. MUFG Global Markets upwardly revised its full-year forecast to 5.5% from 5.2% previously. The Bangko Sentral ng Pilipinas (BSP) estimates inflation to average 5.4% this year.

“Since early 2020, food inflation has been the key driver of overall inflation in the Philippines on top of higher energy inflation, and food inflation itself has been mainly pressured by higher prices of meat and fish,” she said.

Ms. Ng said food inflation is still the biggest component fueling overall inflation, adding 1.4 percentage points (ppts) on average in the first seven months of 2022, followed by transport prices at 1.2 ppts. Prices of meat and fish added 0.4 ppt each to overall inflation so far this year.

“Given that pork is one of the most consumed meat per capita in the Philippines, the share of pork prices under the meat category is likely to be high,” she said.

Aside from ASF, pork prices have also been affected by rising cost of animal feeds as the Russia-Ukraine war disrupted the global supply of feed wheat. The price of corn, which is used as a substitute, has also gone up due to the surge in fertilizer costs.

In June, the price of hogs for slaughter that were bred in backyard farms reached a record P186.54 per kilogram, and is expected to rise further.

“The ongoing supply deficit of pork due to the prevalence of the African Swine Fever, with recovery still a long way to go will keep farmgate prices of hog for slaughter in backyard farms elevated, possibly between 14-18% year on year in the second half of 2022 based on our own estimates, from 12.2% year on year in the first half of 2022 and a 39.1% year-on-year jump for the whole of 2021,” Ms. Ng said.

Ms. Ng said the supply of pork is expected to remain low this year, citing the National Economic and Development Authority (NEDA) estimate of a pork supply deficit of 65,800 metric tons.

While the government lowered tariffs to increase imports of frozen pork, Ms. Ng said this had little impact on prices.

“Based on the current trend, total pork imports this year are likely to exceed those recorded last year. But this is not enough to bring down pork prices substantially as vendors take advantage of the scarcity in domestic supply to keep prices elevated. In addition, the ongoing ASF crimps farmers’ ability to ramp up pork production,” she said.