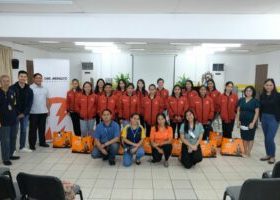 THE PHILIPPINES should cooperate with Indonesia on the South China Sea dispute and boost economic activities in areas being claimed by China, political analysts said on Monday.

Philippine President Ferdinand R. Marcos, Jr. should look at Indonesia’s plan to set up a special economic zone in its key territory in the South China Sea that China claims, they added.

“The Philippines should follow the example of Indonesia in coming up with a strategic response to the growing tension in the West Philippine Sea by establishing a special economic zone,” said Arjan P. Aguirre, a political science professor at the Ateneo De Manila University. He was referring to parts of the South China Sea within the country’s exclusive economic zone.

China’s posturing prompted Indonesia to ensure “legitimate presence of state military facilities” that would let it gain further control of economic activities in the area, he said in a Facebook Messenger chat.

Indonesia is seeking to convert the Natuna Islands, also known as the Natuna Regency, into a special economic zone to boost maritime security while attracting investments there. Indonesia’s exclusive economic zone off the coast of Natuna slightly overlaps with China’s widely disputed South China Sea claim.

Indonesia wants to introduce incentives to boost tourism, fishing, energy and security sectors in the region. The plan came after Indonesian President Joko Widodo signed a decree dividing the Natuna Islands into different regulated zones including exploration, defense and fishing.

It seeks to counter China’s island-building activities at sea.

“Given the current security landscape and emergence of various security threats, President Marcos should closely look into these defense and security-related initiatives that are implemented by Indonesia and see if they fit the strategic plans and current position of the country’s defense establishment,” said Victor Andres C. Manhit, president of Stratbase ADR Institute for Strategic and International Studies.

“President Marcos should strategically engage with Indonesia and discuss steps to further promote a rules-based international order,” he said in a Messenger chat. “This would allow both countries to contribute in minimizing risks and maintaining peace and stability in the region.”

Mr. Marcos, who is on his first state visit to Indonesia, said he and Mr. Widodo “spoke at length” about the role that the 10-member Association of Southeast Asian Nations (ASEAN) should play “at this very volatile time in geopolitics, not only in our region, but also in the rest of the world.”

“We agreed that ASEAN is going to be the lead agent in the changes that we would like to see in continuing to bring peace to our countries,” he added.

Mr. Aguirre said the Philippines could boost bilateral ties not just with Indonesia but also with other neighbors in the region.

“This a way to counter the growing aggressiveness of China without resorting to military response,” he said. “The Philippines should treat Indonesia as one of its most favored partners.”

Robin Michael U. Garcia, who teaches political economy at the University of Asian and Pacific, said Indonesia is an important ally “because of the size of its economy, level of economic development and its population.” “It has also been very vocal toward China.”

“Indonesia has been one of the proponents of a joint ASEAN response toward China,” Mr. Garcia said in a Messenger chat. “It believes that conflict of interest can be overcome.”

Rodrigo R. Duterte, Mr. Marcos’ predecessor, led a foreign policy pivot to China when he took office in 2016. He has been accused of gambling Philippine territories to appease China, which pledged P1.2 trillion in investments and loans to fund big-ticket infrastructure projects.

Mr. Aguirre said Mr. Duterte had failed to boost ties with Indonesia, adding that his engagements were limited to ASEAN concerns.

Mr. Marcos, 64, took office in June amid tensions in the disputed waterway and naval competition for influence among Southeast Asian countries.

In his first address to Congress on July 25, he promised to protect Philippine territories though he did not name China as an aggressor. He neither sided with China nor the United States, saying the Philippines “shall continue to be a friend to all and an enemy to none.”