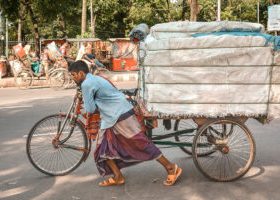 The roots of Bangladesh’s success

Data from the Philippine Stock Exchange showed the telecommunications giant trading P686.13 million worth of 409,460 shares from Aug. 30 to Sept. 2, making it the 11th most actively traded stock last week.

The stock’s price slid by 2.5% to close at P1,669 per share last Friday on a week-on-week basis. Similarly, PLDT has declined by 2.5% since the start of the year.

“PLDT fell last week due to the news that its unit TV5 Network, Inc. had terminated a landmark investment deal with ABS-CBN Corp., as well as investors being concerned about external factors, specifically concerns that the US Federal Reserve would continue to tighten policy aggressively,” Marc Kebinson L. Lood, Timson Securities, Inc. head of online trading said in a Viber message.

The underwriting could have opened revenue-generating “synergies,” but lawmakers questioned the contract’s legality.

Globalinks Securities and Stocks, Inc. Head of Sales Trading Toby Allan C. Arce said in a Viber message that politics just entered the conversation but should not “take away anything from its core business” and shall be seen as a strategic move for both parties to avoid any “significant blow.”

Both analysts said traders should keep an eye on the telco group’s latest launch of Tindahan Ni Bossing (TINBO).

A TINBO virtual number, which lets the user receive calls and texts, enables them to receive a secured one-time password for bills payment, e-government services, and other related transactions.

Other than finances, the TINBO number can also be used to buy prepaid loads for cellular phones, Pay TV, and internet needs.

Mr. Lood said traders are still testing the waters on TINBO’s developments as a payment medium for OFWs.

“In the long term, we expect it to be a convenient way for OFWs to manage their finances and a widely used fintech, potentially bringing in more revenue for PLDT,” he said.

“In the short term, we believe it will have little impact on PLDT’s revenue because only a small percentage of OFWs will have access for the time being, and there are already existing Fintech mobile applications in the Philippines and abroad that OFWs are using,” Mr. Lood said.

The net income attributable to equity holders of PLDT increased by 7.6% year on year in the second quarter to P7.66 billion. This brought the first-half attributable net earnings to P16.74 billion, a 29.6% jump from the same period last year.

Mr. Arce, for his part, projects the telco company’s net earnings in the third quarter to hit P6.9 billion, while full year at P31.4 billion.

Hastings Holdings, Inc., a unit of PLDT Beneficial Trust Fund subsidiary MediaQuest, has a majority stake in BusinessWorld through the Philippine Star Group, which it controls. — Ana Olivia A. Tirona