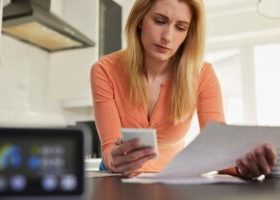 The first study of the likely extent of non-payment found 6 per cent of people intend to cancel monthly payments in October. When extrapolated nationally this equates to 3.16 million people, about 1.7 million homes.

More than half of those who plan to stop their payments say they have been inspired by the Don’t Pay campaign, which is urging a million people to pledge to cancel their direct debits if the government takes no further action to prevent the bill increases.

Ofgem’s price cap for domestic energy consumers will increase on the first day of next month, raising the average household bill to £3,549 a year.

If a million households collectively stop paying, Britain’s energy suppliers could be thrown into chaos, causing a wave of bankruptcies across the industry, driving up bills for other consumers.

Don’t Pay organisers estimate that a direct debit payment strike by a one million people would withhold £1.4 billion. If 1.7 million households stopped paying, the industry could lose £2.38 billion. The campaign, which is run by a group of anonymous activists, said last week that 117,000 people had committed to stoping their direct debits so far.

The survey released today by Opinium Research suggests that the group’s message has cut through widely.

The research, which questioned 2,000 adults, highlights the scale of the challenge households will face. It found that more than half of those questioned still did not know how they would afford to pay the new tariff and almost one in ten already knew that they would not be able to cover the cost.

In an attempt to make ends meet, almost three in ten planned to cut back on how much they spent on essentials, such as groceries, and one in ten would take on extra work.

One in 20 intended to borrow more to help to stay afloat. Nearly one in five fear that they would not be able to keep their present home if bills kept rising.

Households that repeatedly do not pay their gas and electricity bills could have the debt passed on to a collection agency. Suppliers can also force entry to the homes of customers in default to install a prepayment meter, which is a more expensive way to buy energy.

If an unpaid bill is referred to a debt collection agency, it could also affect a customer’s credit rating, making future borrowing more expensive.

The Don’t Pay campaign leaders believe, however, that the energy industry will struggle to take effective action against customers if such a large group collectively stops paying at the same time. Charities have warned that there is no “protection in numbers”.

Akansha Nath, of Credit Karma, the multinational credit reference service that commissioned the survey, said: “The rising cost of living has felt relentless for many households over the last year and the expected changes to energy tariffs in October are understandably making many people feel anxious about their financial future.

“But it’s important for consumers to remember this can have longer-term consequences on their financial stability. If you’re worried about making repayments, explore all the available help open to you, from government support, to repayment extensions from your provider.”