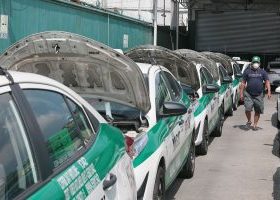 OnlyFans has paid out more than $500m (£433m) to its reclusive owner in the last two years, as the British-based subscriber platform synonymous with pornography reported record profits.

Leonid Radvinsky, the site’s Ukrainian-American 40-year-old owner, is the sole shareholder in a business that has seen its profits boom, as users spent $4.8bn on the site last year.

The financial results mean OnlyFans is one of the most financially successful British tech start-ups in recent years, succeeding where other more mainstream companies have failed. The company’s latest accounts show pre-tax profits rose by 615% to $432m in the 12 months to September 2021.

The site acts as a marketplace for adult performers, who upload their own material and keep 80% of the revenue. The remaining 20% goes to OnlyFans and covers the cost of running the business, handling credit card processing, and providing a very healthy income for Radvinsky. He has been paying himself as much as $45m a month in dividend payments.

Despite OnlyFans’ best efforts to claim that its platform allows celebrities and musicians to monetise their social media following – and investment in its OFTV service – the site’s main attraction remains pornography. OnlyFans has 2.1 million registered “creators” who can sell content and 188 million registered “fans” who can buy videos or pay to message their favourite performers.

The business model cuts out the traditional pornography studios and allows creators to keep the vast majority of the revenue from viewers. However, this also requires them to take responsibility for their own marketing and requires a constant stream of new material for subscribers.

OnlyFans was founded by an Essex family in 2016, with Tim Stokely as chief executive and his ex-banker father Guy as a director. At various points both Tim’s brother and mother were both involved in the business.

The company only really took off after 2018, when they sold the site to Radvinsky, who had past experience of running pornography sites. The Stokelys remained as executives but cut their ties with the company at the end of last year.

OnlyFans’ accounts also show that the company has written down the value of Delivery Code Ltd, a company it bought from the Stokely family for £23.65m, to zero.

Although the vast majority of OnlyFans’ income arrives from customers based in the US, it remains registered in the UK and paid $88m to HMRC in corporation tax last year.

The banks eventually relented and the adult material survived but this helped prompt a change in leadership, which led to the appointment of former marketing boss Amrapali Gan as chief executive.

She said: “We are empowering creators to monetise their content and have real control over it. Our unwavering commitment to our creators has powered our success over the last 12 months.

“We will continue to invest in the creator economy by enhancing safety, developing original OFTV content, and continuing to grow our community of creators and fans.”