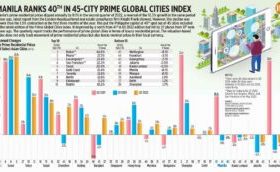 ADAM DRIVER in White Noise, which is the opening film of the Venice Film Festival.

VENICE — The Venice Film Festival opens on Wednesday with all health limitations lifted, but with the emotional fallout of the pandemic echoed in the many films exploring families facing trauma, which highlight a new generation of talent.

For movie fans it will be a welcome return to normal at the world’s oldest film festival, as they are once again able to greet stars arriving at the Lido red carpet for the 11-day festival.

“We missed the atmosphere, the mood, the joy of the people watching the talent on the red carpet,” festival director Alberto Barbera told Reuters.

Regarded as a launch pad for Oscar contenders, Venice has become increasingly important for production houses looking to showcase some of their most eye-catching movies, which this year feature a younger-than-usual line-up of budding A-listers.

“I think that we are facing a sort of renovation of the generation of the talent and the filmmakers as well,” said Mr. Barbera. “This is the cinema of tomorrow, of course.”

While Venice draws together movies from vastly different countries and cultures, many appear to have a similar theme coursing through them — dysfunctional families struggling to overcome trauma and chaos.

“The pandemic created a lot of problems inside the families … and most of the films that we are showing in the festival are reflecting this situation,” said Mr. Barbera. “The tone is pretty dark, actually.”

TOXICThe opening picture, director Noah Baumbach’s White Noise, which stars Adam Driver and Greta Gerwig, should provide some humor as it shows an American family’s efforts to deal with everyday life even as they confront toxic disaster.

The Son, starring Hugh Jackson, shows a family struggling to reunite after falling apart, while The Eternal Daughter, follows an artist, played by Ms. Swinton, as she confronts long-buried secrets with her elderly mother.

The Whale by Darren Aronofsky, portrays Brendan Fraser as an obese man attempting to reconnect with his estranged daughter, played by Stranger Things actor Sink.

Other People’s Children by Rebecca Zlotowski, Love Life by Koji Fukada, Saint Omer by Alice Diop, Our Ties by Roschdy Zem all put aspects of family life at the heart of their dramas, as does L’Immensita by Emanuele Crialese, which stars the winner of last year’s best actress award, Ms. Cruz.

One of the most anticipated films is Andrew Dominik’s Blonde which features Cuban-born actress Ms. de Armas in an emotional re-telling of how an unwanted child became the most sought-after and troubled star of her age — Marilyn Monroe.

Blonde is one of four Netflix films up for the prestigious Golden Lion prize — a testament to the streaming company’s movie ambitions even as it struggles to maintain subscribers.

While much attention is focused on the main prize, a handful of movies shown out-of-competition could steal the limelight, including steamy thriller Don’t Worry Darling, directed by Olivia Wilde and starring Ms. Pugh and Mr. Styles.

An apparent fallout between Ms. Wilde and Ms. -Pugh, and Internet gossip over relations between Wilde and Styles has only fueled interest in the film, which premiers in September. — Reuters