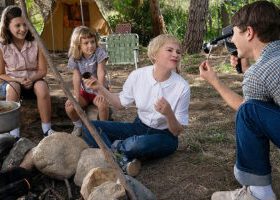 A Minute with: Michelle Williams on playing Steven Spielberg’s mother

IF THERE’S ANY DOUBT that COVID is in the rearview mirror for Singapore, set it aside. The country is making new efforts to lure the foreign talent it needs to stay in the game as one of Asia’s preeminent global cities and hubs for business. Having tumbled out of the pandemic looking good, due in no small part to blunders by rivals like Hong Kong, Singapore wants to press the advantage. Implicit in this is a recalibration of the signals transmitted to the outside world.

While the tiny republic has always presented itself as far more open than neighbors, the most recent campaign has stepped up a few notches. The government said on Monday that it’s overhauling visa rules, establishing a new five-year pass for foreigners earning at least S$30,000 ($21,431) a month that allows them to work at multiple companies and lets dependents seek employment. Requirements to advertise jobs locally before hiring expats will ease. Manpower Minister Tan See Leng depicted the changes as an opportunity: “Both businesses and talent are searching for safe and stable places to invest, live and work in. Singapore is such a place.”

Singapore’s safety and stability have never really been in doubt. There’s little violent crime or theft — it’s a great place to raise children — and the People’s Action Party has governed since independence from Malaysia in 1965. What had been in question in the past few years, accelerating during the pandemic, was how much Singapore really wanted to add more of the world’s best and brightest to its 5.5 million population. Eliminating or smoothing some barriers to immigration will be nice, but it’s going to require a change in attitude, too.

The same global talent that Singapore wants to attract encountered ambivalence, at best, and what many expatriate workers regarded as punitive labor and immigration regulations during some of the toughest days of the pandemic. These were preceded by a deep recession and an electoral setback for the PAP in 2020 that was widely perceived as partly backlash against too many foreigners taking plum jobs. Expats confronted restrictions on the ability of spouses to work, an escalation in the minimum salaries for work passes, and no guarantees of getting back into Singapore if you left to care for ill folks at home. Ministers lined up to warn multinational employers against stripping local headcount when laying off staff. Firms suspected of not giving homegrown talent a fair shot were placed on a watchlist.

Singapore can, of course, make what laws it wishes. It has first and last say on who comes in, on what terms. Nobody I know questioned that. But the message became very mixed. Leaders said that closing off would be the republic’s demise, but there would often be sufficient caveats that local constituencies felt their concerns were being addressed. Finance came in for some withering scrutiny, despite a long-term ambition to make the country a hinge point for money markets. Business got the message: In July last year, as parliament debated the workforce, Citigroup, Inc. issued a press release trumpeting the appointment of Singaporeans to senior jobs.

Now, with more economies reopening, the message is shifting, at least in tone. This was on vivid display during Prime Minister Lee Hsien Loong’s National Day Rally speech, in which he announced the repeal of a controversial law criminalizing sex between men that had long been a source of bad PR. Lee didn’t draw a direct link, but devoted important parts of his address to the need to stay engaged in the world. In the hunt for talent, Lee said, “Singapore cannot afford to be creamed off, or left behind.”

Singapore wants to prevail in a rough post-pandemic period characterized by the end of low levels of inflation, interest rates, and wages. A scramble for human capital will be another — and more challenging — trademark of this new era. It’s not just high-flyers that Singapore needs, as vital as they are. The new visa’s floor of S$30,000 a month is comparable to the income of the top 5% of Employment Pass holders. The reopening has been accompanied by a labor shortage at most levels, from contractors to work on home renovations to engineers and technology executives. Tan stressed that the government is committed to grooming local talent and leadership. Wooing stars from abroad creates the kind of vibrant economy that gives Singaporeans opportunities, he said.

The visa initiatives were unveiled hours after wearing masks against COVID became voluntary indoors, with exceptions for public transport, healthcare, and food preparation. It had been a long wait. After more than two years, kids can see the faces of their teachers in classrooms, and each other. More pragmatically, with business travel and tourism on the rise globally, Singapore has dispensed with yet another deterrent, albeit one that wasn’t onerously enforced the past few months. (The presence of red-shirted “safe-distancing ambassadors” has been scaled back. SDAs used to be a common sight taking photos of patrons drinking lattes at tony cafes downtown, haunts for expats and Singapore’s cosmopolitan class, in their vigilance for violations of protocol.)

Still, along Orchard Road malls on Monday evening, there wasn’t an obvious difference. Indoors and outdoors, many people kept masks on. Attitudes and hard-learned habits can’t be turned around overnight. Is the warmer reception for foreign expertise best seen as evolution or revolution? I’ll give Singapore the benefit of the doubt. If it doesn’t work out, officials can always nudge the pendulum again. Pragmatism will still rule.