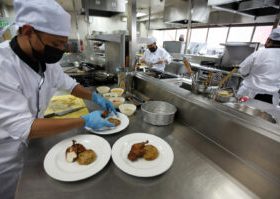 Jobless rate eases to 5.2% in July

To argue that Russell Westbrook has not been having a good offseason would be understating the obvious. Fresh off a campaign in which his skill set appeared to be in decline, he has seen developments reflect his worth — or, to be more precise, lack thereof. His name has been linked to just about every major trade scenario, what with the Lakers bent on improving their roster following a supposed run for the championship that turned into an abject failure to even make the playoffs. And because he continues to exhibit the pride that fueled his stardom in the first place, he’s not taking it well; he has even found cause to part ways with longtime agent Thad Foucher.

Amid the tumult, the Lakers have, not surprisingly, sought to mend fences with Westbrook. Forget that they remain bent on dealing him for assets they believe will get them closer to the hardware. Considering his $47 million price tag, however, he’s a veritable albatross that gives potential trade partners pause; the latter would need to be either desperate or aiming to rebuild through the use of his expiring contract. Which means that, for all the desire of the purple and gold to show him the door, he may yet be around when the 2022-23 season gets under way. In a nutshell, this explains why the likes of head coach Darvin Ham and top dog LeBron James keep publicly propping him up; they need him to be focused on the task at hand should he still be around when the games begin.

That said, the message the Lakers are really sending cannot be denied. Heck, they even went so far as to trade Talen Horton-Tucker, a talent they hitherto held in high regard, and Stanley Johnson, arguably their best wing defender, for aging two-way player Patrick Beverley. On paper, it makes a lot of sense since it addresses a primary weakness. However, they could not have been blind to the fact that Westbrook has had a long-running feud with their new acquisition. To spread the welcome mat for an acknowledged enemy of their supposed pillar speaks of their true intentions.

Westbrook isn’t stupid. He knows he isn’t wanted anymore, and it riles him no end that the Lakers have given up on him just a year after they wooed him with a rosy picture of the future. Then again, he also knows it’s the nature of the business, and that the only way he can silence naysayers is to prove that he’s not washed out, all the advanced metrics discounting his value notwithstanding. So, yes, he’ll be a fixture in talks for asset swaps. And, yes, if he’s serious about giving critics the finger, he should view it as motivation, period. It’s not the first time he has been doubted, and it won’t be the last.