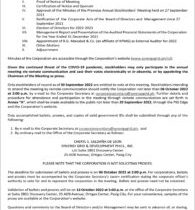 SMPC President and Chief Operating Officer Maria Cristina C. Gotianun told BusinessWorld through email on Wednesday that the company is at the preliminary stage of studying LNG and solar.

On Aug. 16, Isidro A. Consunji, chairman and chief executive officer of SMPC, said in a virtual press briefing that the company is planning to diversify into renewable energy (RE) sources.

Ms. Gotianun said that initially, SMPC was looking at a number of RE sources such as run-of-river hydroelectricity, biomass, and wind.

“[U]nfortunately, after careful review, none of these met our technical and investment criteria,” she said.

Ms. Gotianun cited issues related to peace and order, fuel sufficiency, resource reliability, land availability, and grid connectivity as the reasons for looking at LNG and solar, instead of the company’s first proposals.

Data from the natural gas division of the Department of Energy (DoE) showed that there are six proposed LNG terminal projects in the Philippines.

Further, Marissa P. Cerezo, director of DoE’s Renewable Energy Management Bureau said in a virtual press briefing led by the Center for Energy, Ecology, and Development on Saturday that the department is also looking to address the intermittency problems of variable REs.

“Intermittency is given especially for solar, and wind. Those technologies cannot generate power 24/7,” she said.

Ms. Cerezo suggested that the daytime fluctuation of solar and wind energy sources could be addressed by enhancing the weather forecasting system.

SMPC said in its disclosure on Aug. 22 that its previous plan of transferring or consolidating DMCI Mining Corp. into SMCP is on hold pending confirmation of the mineable reserves of DMCI Mining. — Ashley Erika O. Jose