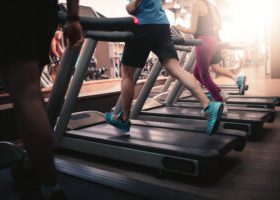 How Treadmill Use Can Benefit Your Health

Retailers saw an unexpected pick-up in sales last month, but the mood among companies was still its bleakest since the start of the pandemic, a survey has suggested.

Higher prices pushed up the total value of sales compared with August 2021, while volumes were flat, according to a monthly survey by the CBI.

The net balance on its sentiment index rose to 37 per cent in August, from -4 per cent in July. The results are the difference between the percentage of retailers reporting a rise and those reporting a decrease in sales, compared with the same month a year ago.

However, confidence among companies about their business outlook for the next three months hit -22 per cent, down from -13 per cent in May and the lowest level since the first lockdown in May 2020.

Prices for customers continued to rise, with the month-on-month growth in the number of firms reporting price rises reaching its fastest pace since 1985. About 88 per cent of retailers said the average price at which they sold their goods had risen in the year to August and only 1 per cent said that prices had fallen, giving a net balance of 87 per cent. The figure in July’s survey was 77 per cent.

Data published by the Office for National Statistics last week showed that online spending rose last month, offsetting declines in the sale of clothing, fuel and household goods. Retail sales volumes rose by 0.3 per cent between June and July: better than the 0.2 per cent contraction forecast by economists and reversing a 0.1 per cent dip between May and June.

Retail sales figures have become a key indicator for the health of the economy as rising inflation eats into people’s incomes and savings, while many businesses are being forced to pass on higher costs to customers.

Online sales volumes rose by 4.8 per cent in July, reversing a 3.7 per cent slide in June.

The CBI figures suggest that online sales fell in August compared with the same month in 2021. The net balance for internet shopping was at -7 per cent, up from -37 per cent in July. Online sales are expected to stagnate next month. Retailers plan to cut back on investment in the next year amid concern that Britain is heading for a recession caused by the cost of living crisis.