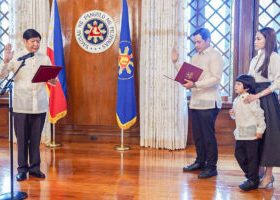 EDUCATIONAL institutions should work to reduce the time needed to earn degrees to push students into the workforce faster, the Department of Trade and Industry said.

“The trend now in higher education is to shorten the number of years needed to get a college degree. In some countries who have successful K to 12 programs, they award a college degree in two or three years, in Singapore and other countries… We have to move towards that direction,” Trade Secretary Alfredo E. Pascual told the 43rd National Conference of Employers (NCE) organized by the Employers Confederation of the Philippines in Pasay City on Wednesday.

Mr. Pascual, a former University of the Philippines system president, called for the curriculum to be reworked to favor training in specific skills.

The K to 12 program (Kinder to Grade 12), rolled out during the 2012-2013 school year, added two years to secondary education to make graduates ready to enter the workforce if they so choose.

Mr. Pascual said employers should invest in developing skills as the benefits of the K to 12 program have yet to be fully felt.

“I think the employers should invest in the training of our people. We know very well that our educational system has yet to be reoriented towards the skills needed in our time. It is behind. We need digital skills, but these are not yet being developed,” Mr. Pascual said.

“Basic education was supposed to produce graduates that are technically qualified to work. But it has not happened for many reasons, including the availability of competent teachers. It will take a long time for this to be solved,” he added.

Asked to comment, Rizal Commercial Banking Corp. Chief Economist Michael L. Ricafort said in a Viber message that the education system needs to remain competitive and to adapt to the requirements of the global labor market.

“In view of the changing economy and work environment amid increased digitalization, the educational system needs to constantly adapt and better prepare students to remain competitive and align with global best practices as well,” Mr. Ricafort said.

George T. Barcelon, Philippine Chamber of Commerce and Industry president, said during an interview on the sidelines of the NCE that he supports Mr. Pascual’s proposal.

“What I think we need is the skills. I do believe that the way we teach can be shortened,” Mr. Barcelon said.

“There are different educational and training paths depending on individuals, industries, and careers. Some do focus more exclusively on skills for specific jobs,” Mr. Alcuaz said.

“But there is a lot of feedback that citizens and workers across the spectrum lack communication, comprehension, reading, and critical thinking skills that help in getting hired, doing the job, and being a more productive member of society. These skills can be deepened in college, and college students probably need to deepen these skills for the careers they aspire to,” he added.

Rene E. Ofreneo, professor emeritus at the UP School of Labor and Industrial Relations, said in a mobile phone interview that the proposal should be further studied.

“We don’t have a developed industrial base. What we have is a service-oriented economy. Most of those in the services are Filipinos who are not college graduates. I suggested that the proposal be studied more,” Mr. Ofreneo said.

“We should look at both the supply and demand sides. Right now, four out of five in the labor force are actually in the informal sector,” he added. — Revin Mikhael D. Ochave