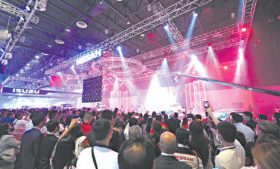 CAMPI: Vehicle sales to reach pre-pandemic levels by next year

IF YOU EXPECT your job to give your life meaning, you’re setting yourself up for failure. There was a time when a job was just an economic transaction: Someone paid you for your labor and that enabled you to live and support your family. But for a variety of reasons, many workers today expect more. They want purpose and meaning from their work. And if they don’t find it, some are leaving jobs, or just putting in minimal effort for their paycheck.

This is a costly mistake, though I understand why it’s tempting. I love my job and find it incredibly rewarding. I wish the same for everyone else. But I didn’t always find my work especially meaningful. Job satisfaction doesn’t come easy; it’s something you achieve over time as you gain skills and status in your field.

My best advice to you if you’re looking for a job is to just go for the money — or the chance to learn something new, or the work-life balance you need — and steer clear of any employer that touts a mission or promises to give your life purpose. Such promises lead to disappointment, more than anything. If that sounds craven, then the better solution is to adjust your definition of what you find meaningful.

Employers have been forced to compete for workers as recent labor shortages grew more intense. To help their recruiting, several consulting firms surveyed workers to find out what they’re looking for in a job. And those surveys show it’s not about the money; workers today are looking for more meaning. One survey found workers would take a 23% pay cut for a job they find meaningful.

There are a lot of different ways people define “meaning” in their jobs, but a popular answer is work that serves a higher purpose. It’s not surprising that the need is most pronounced in young people, some of whom have begun to brag on social media about “quietly quitting” — which is to say, shirking on jobs they don’t deem worthy of additional effort. Outgoing Whole Foods CEO John Mackey recently complained that younger people weren’t working as hard because they’re demanding meaningful jobs before they’ve earned them.

That perceived “lack of meaning” isn’t because the current younger generation is more idealistic than its predecessors, but because early-career jobs involve lots of grunt work that often feels pointless. Developing skills can be an unpleasant process, full of boring tasks that are needed to gain mastery, and with inevitable failures that feel frustrating and humiliating at times. It’s hard to find meaning while you’re endlessly slugging back coffee or staying up nights obsessing about the font on someone else’s PowerPoint presentation. But this is how you learn skills like customer service, time management, and negotiating workplace culture.

So early jobs are not that different. What may have changed is the expectation that every job is supposed to be meaningful in a particular save-the-world way.

Those new expectations are a reflection of a world that has changed, especially recently. Working from home means less time kibitzing with colleagues, which leaves more time to question what the point of it all is. Work also feels less meaningful if you don’t feel like part of a team because you don’t see yourself helping your coworkers. A tight labor market also means people can be a little fussier about what job they choose to do.

There are also bigger cultural shifts that have been brewing for decades. MBAs don’t want to be Gordon Gekko anymore, they want to be Bill Gates (at least, during his philanthropy stage). Many tech firms promise workers a mission to make the world a better place, and that sounds compelling. And all over the country, many people are less connected to their communities or churches, and now their job has to fill that void.

This is not just economically inefficient; jobs with lofty missions and promises of spiritual fulfillment often lead to frustration. In reality, a big part of job satisfaction comes from feeling like there is a path for advancement. That’s one reason the military (where keeping up morale is especially critical) has such rigid and clear paths forward. If you work at a company where the mission is earning a profit, the metrics to advance are clear.

When the mission is fuzzier, advancement becomes more arbitrary, and that can be a morale killer. Take the online shoe store Zappos, which once promised to provide purpose — to be the kind of place you’d even work for free. Eventually the culture became toxic because employees didn’t have a sense of what success meant or what they needed to do to advance.

Consider this: While McKinsey’s survey found workers want to find meaning in their jobs, the industry with one of the highest rates of attrition is non-profits.

Employers need to make hard choices to stay in business. That may mean working with a customer who doesn’t fit your moral standards, or avoiding contentious political issues. It may mean moving some jobs abroad where labor is cheaper. These choices are understandable when the mission is profit. But if the mission is making the world a better place, every employee will have different ideas of what’s acceptable (especially if you take less money and are working very long hours in service of this mission). Then, it’s hard not to take everything personally, which leads to a much more toxic culture.

Most of us spend a large share of our lives at work. It’s important to feel a sense of purpose and to be motivated by what we do. But what few people will tell you is that meaning doesn’t come from a mission to change the world. People feel valuable when they can apply their skills to solve problems. Sometimes that satisfaction come from solving the world’s big problems, but more often it’s conquering the little ones. People who report high levels of job satisfaction often aren’t working at cool startups or NGOs — you’ll find them at all kinds of jobs, like truck driving.  They do their jobs well, apply their skills and are paid accordingly — it’s not complicated.

All jobs are meaningful. If someone pays you to do something it has value. And if a desire for a job with a big mission that will give your life meaning prevents you from working hard or staying in a job long enough to develop skills, you will not only earn less money, you will never find what you are looking for.