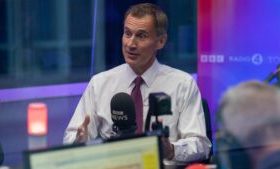 ALL THREE Peter Parkers — played by Tom Holland, Andrew Garfield, and Tobey Maguire — are swinging back into theaters with the re-release of Spider-Man: No Way Home. Arriving in Philippine cinemas on Sept. 7, Spider-Man: No Way Home will feature extended scenes and 11 minutes of never-before-seen footage. The return engagement comes in celebration of 60 years of the Spider-Man comic book character, in addition to the last two decades of Spider-Man films gracing the big screen. The movie’s first release back in January saw theaters with seating capacity limited and children still not allowed outside their homes due to the COVID-19 pandemic. With the re-release, fans who were unable to experience the movie on the big screen will now have a chance to. The film is directed by Jon Watts, written by Chris McKenna and Erik Sommers, and based on the Marvel Comic Book by Stan Lee and Steve Ditko.

CONCERT Republic announced that The Bootleg Beatles concerts scheduled for Oct. 27 at the SMX Convention Center, Davao, and Oct. 29 at the Waterfront City Hotel & Casino, Cebu have been canceled. “Regrettably we have to cancel our forthcoming concerts in Davao and Cebu due to unforeseen production logistics, however our Manila show at Philippine International Convention Center (PICC) Sunday 30th October 2022 will proceed as advertised,” the statement on Concert Republic’s Facebook page wrote. “We apologize for any inconvenience caused and look forward to seeing you all in Manila.” Tickets for the canceled Davao and Cebu shows will be refunded at the point of purchase. For more information and updates, visit www.facebook.com/concertrepublic.

FILIPINO alternative soul and rock band Mercury tackles love that knows no bounds in their new single “Enough.” Written collectively by the band, the song deals with acknowledging how relationships grow stronger over time when compromising and weathering storms. Co-produced by frequent collaborator and former bandmate knōwmaad, “Enough” marks the band’s return to their rock-leaning roots, incorporating a bass-heavy sound. The song, which serves the second track from of Mercury’s upcoming EP Changin Vol. 3, was conceived during the band’s remote songwriting session in Tagaytay City during the quarantine. “Enough” is available on all digital music platforms worldwide.

Discover songs by Pinays on Spotify

SPOTIFY is making it easier for local listeners to belt out hit tracks, with a power list of anthems by established and up-and-coming Pinay artists. Beyond the platform’s EQUAL campaign, which spotlights female artists on the global stage, Spotify is featuring Filipina artists in playlists such as Tatak Pinoy (fronted by Moira Dela Torre), magmuni-muni, OPM Rising, and Mabuhay, Pilipinas!.

Netflix’sSeoul Vibe out this week

Enola Holmes 2 out in November

AFTER the triumph of solving her first case, Enola Holmes (played by Millie Bobby Brown) follows in the footsteps of her famous brother, Sherlock (Henry Cavill), and opens her own agency — only to find that life as a female detective-for-hire isn’t as easy as it seems. Enola Holmes 2 is directed by Harry Bradbeer, it stars Millie Bobby Brown, Henry Cavill, David Thewlis, Louis Partridge, Susan Wokoma, Adeel Akhtar, Sharon Duncan-Brewster, and Helena Bonham Carter. The series premieres on Nov. 4 on Netflix.