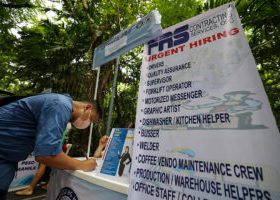 FISH farmers in Bohol who received assistance from the Bureau of Fisheries and Aquatic Resources in 2021. — BFAR.DA.GOV.PH

THE BOHOL provincial government is considering a buy-up program with local fisherfolk to address the rising prices of fish since the start of the coronavirus pandemic and worsened in the aftermath of typhoon Rai, locally known as Odette, in mid-December last year.

Provincial Administrator Aster C. Caberte, in a recent episode of the local government’s The Capitol Talks forum, said they are looking into directly purchasing local catch to help stabilize prices in the market amid growing concerns from consumers in the island province.

The provincial government in a statement on Wednesday said it also will be consulting with fisherfolk to track pricing from the source to retail markets.

Salvador D. Diputado, Department of Agriculture assistant secretary-designate for Visayas, first mentioned the purchase program in an earlier episode of the forum.

He said local governments have authority for such a regulation scheme, which could stop middlemen from jacking up prices.

Ms. Caberte, a former assistant secretary at the Department of Trade and Industry, said state-run Land Bank of the Philippines (LANDBANK) has also pledged to make funds available to assist fisherfolk.

“The funds are for them (fisherfolks) so that they’ll have the right amount to pay off their loans,” she said in Visayan.