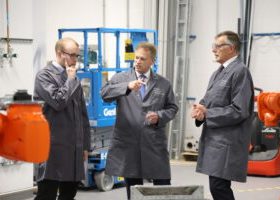 ALSONS Consolidated Resources, Inc. announced on Thursday that its board of directors approved the issuance of P3 billion in short-term commercial papers.

In its regulatory filing, the Alcantara-led company said that the new debt papers will be issued in one or more tranches. The proposed issuance was approved during a regular board meeting on Thursday.

Alsons said that its board of directors also authorized MIB Capital Corp. as the financial advisor, SB Capital Investment Corp. as the underwriter and issue manager, and Acuña & Francisco Law as transaction counsel.

Alsons also named AB Capital and Investment Corp.-Trust Investment Division as faculty agent and the Philippine Depository and Trust Corp. as the registrar and paying agent.

The board of directors also authorized an application for the registration and licensing of the commercial papers with the Securities and Exchange Commission and listing with the Philippine Dealing and Exchange Corp. (PDEx).

The listed company, which is engaged in power generation and property development, did not say where it will use the proceeds of the issuance.

Earlier this month, Alsons said that its focus is on building up its renewable energy capacity in the coming years, with around eight run-of-river hydroelectric power facilities in its pipeline.

The first of these facilities is the 14.5-megawatt (MW) Siguil hydropower plant, which is under construction in Maasim, Sarangani. It is targeted to begin operations in the second quarter of next year.

Alsons, which is said to be Mindanao’s first privately owned power generator, currently has a portfolio of four power plants with a combined capacity of 468 MW.

Proceeds from the previous issuance were allotted primarily for general working capital purposes.

In the second quarter of the year, the company’s attributable net income declined by 27.1% to P90.52 million from P124.19 million in the same period last year.