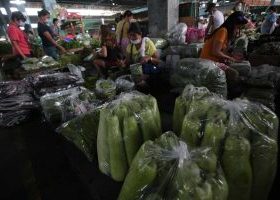 TROPICAL storm Florita, with international name Ma-On, exited the Philippine area Wednesday morning, leaving more than 2,000 families affected and a trail of flooding, landslides and damaged crops in northern parts of the country.

He said local government units in northern Luzon and the NCR so far released over P1.1 billion worth of assistance for families affected by the storm, the sixth to enter the country this year.

Interior and Local Government Secretary Benjamin C. Abalos, Jr. said 1,806 families or 6,721 individuals were preemptively evacuated due to the typhoon.

On infrastructure, the Department of Public Works and Highways said it identified seven national road sections in the Cordillera Administrative Region and Cagayan Valley that were closed due to landslide, fallen trees, and flooding.

The department noted that Florita enhanced the southwest monsoon and dumped heavy to intense and at times torrential rains with strong winds over Luzon.

“A total of 990 personnel with 117 equipment… have been deployed to ensure swift clearing and reopening of affected national roads and bridges,” it said.

Local airlines canceled several flights to and from Manila on Wednesday “due to bad weather at the destination,” the Manila International Airport Authority said in its advisories.

“While there were reports of power outages in areas severely affected by Florita, no significant service disruptions were detected throughout our network in northern Luzon,” it said in an e-mailed statement.

Globe Telecom, Inc. said separately that it deployed free call services and free charging stations in several areas in Tuguegarao City and other parts of Cagayan province affected by the storm.

An 8:00 a.m. Wednesday update by the government’s disaster management agency showed that power interruptions were reported in 13 cities and municipalities. Of these, five were already restored.

Six diesel power plants were affected, according to the Department of Energy, citing reports from the National Power Corp.

The National Grid Corporation of the Philippines, meanwhile, assured that all transmission lines and facilities in northern Luzon were under normal operations.

AGRICULTUREThe typhoon has affected 310 farmers and 628 hectares of farm lands, with an initial damage estimate of P3.01 million in Ilocos Norte province alone, the Department of Agriculture said in a report.

The cost of damage to crops is expected to increase as field offices are still conducting ground assessment, it added.

A long queue of farmers seeking government compensation for their damaged crops was reported in Baggao, Cagayan province on Wednesday. A Facebook report by the local government said 800 hectares of corn and 12,000 hectares of rice were destroyed by the typhoon.

About 20 typhoons enter the Philippines every year, with an average of five that are destructive, according to the Asian Disaster Reduction Center.

The country, which is highly susceptible to sea level rise and storm surges, has yet to declare a climate emergency, which would authorize the government to mobilize funds to step up climate mitigation efforts.

“The Philippines on average is suffering $3 billion in annual damages from extreme climate impacts alone,” the Global Witness said in a report last month.