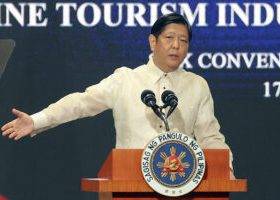 A glimpse of what lies ahead

AUTHORITIES seized P173.40-million worth of crystal methamphetamine, popularly known in the Philippines as shabu, in a buy-bust operation near the capital Manila on Wednesday morning, according to the presidential palace.

The anti-drug operation happened amid a supposed spate of crime incidents involving killings and kidnappings in the capital region and nearby provinces.

Mr. Abalos said the public should expect more police visibility due to the alleged crimes, which have already triggered public anxiety.

He has asked the country’s police chief to provide a report on the incidents.

There have been numerous social media posts of supposed personal encounters with such crimes, which include warnings against criminals, particularly kidnappers onboard white vans.

“It is important to get the real figures,” Mr. Abalos said. “It is hard to rely on hearsay.” — Kyle Aristophere T. Atienza