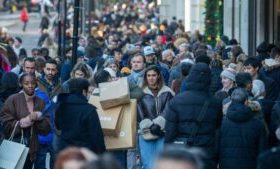 Unite union chief Sharon Graham has warned employers there will be no end to the strikes that threaten to cripple the British economy.

“I expect employers that have the ability to pay to do so and stop using inflation and the pandemic as a reason not to pay proper pay rises to workers,” said Graham, who is about to celebrate her first year as Unite’s leader.

The union is currently engaged in a battle with the port of Felixstowe, as on Sunday around 1,900 dock workers embarked in an eight-day walkout over salaries.

Unite has accused the port and its Hong-Kong-based parent company of profiteering off the backs of workers.

Earlier this month, Felixstowe fattened its initial 7 per cent pay increase with a lump sum of £500 but Unite didn’t even submit it to its members as it was below the current inflation rate of 10.1 per cent.

“We know that members want an inflation pay rise, they have just voted 92 per cent in favour on a 80 per cent turnout,” Graham said.

The walkout at Felixstowe is the latest industrial action to hit vital sectors – with strikes on the railways and at airports already bringing chaos to Brits this summer.

“Some employers are choosing this moment to say that they’re not going to pay the rate of inflation and, unfortunately, that will mean there will be more disputes,” she added.

“If employees continue in this vein, then obviously, I will continue to do everything in my power to make sure that my members have more money in their pocket.”
Transport minister Grant Shapps recently said it was not right for the country “to be held to ransom by Union bosses seeking to protect outdated work practices that have no place in the 21st century.”