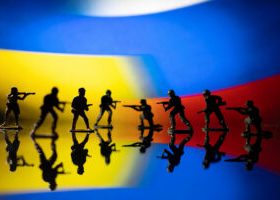 A Philippines peso note is seen in this illustration on June 2, 2017. — REUTERS/THOMAS WHITE/ILLUSTRATION

THE PHILIPPINE government on Tuesday raised an initial P162.72 billion in an auction of retail Treasury bonds (RTBs), the first under the Marcos administration.

Tenders at the rate-setting auction reached P225.32 billion, or more than seven times the P30 billion on offer at the Bureau of the Treasury’s (BTr) second retail bond offer this year, as investors sought safe-haven investments.

The five-and-a-half-year RTBs fetched a coupon rate of 5.75%, higher than the 4.875% set for similar five-year bonds in March.

The RTBs’ coupon rate is also higher than the five-year debt papers quoted at 5.4337% in the secondary market, based on the PHP Bloomberg Valuation Reference Rates published on the Philippine Dealing System’s website.

“This issuance serves as an important component of the National Government’s fundraising efforts to finance our development programs aimed at building a sustainable, inclusive, and broad-based economy,” Finance Secretary Benjamin E. Diokno said at the launch of the 28th tranche of RTBs on Tuesday.

The public offering for today (Aug. 24) has been canceled in view of the suspension of government work due to severe tropical storm Florita. It will resume on Thursday (Aug. 25), according to the BTr.

Mr. Diokno said these investment instruments “allow Filipinos to contribute to nation-building while growing their hard-earned savings with better returns.”

The five-year bonds are being sold in denominations of at least P5,000, and in multiples of P5,000 thereafter.

Holders of fixed-rate Treasury notes maturing on Sept. 13, Dec. 4, Dec. 6, and Feb. 11 of next year can swap their holdings for the RTBs, the Treasury said. The minimum exchange offer is P5,000.

The offer period for the peso-denominated debt is from Aug. 23 to Sept. 2, while settlement is on Sept. 7.

“The coupon is attractive enough for end-user clients and general public who wish to contribute to nation-building by investing in the RTB,” the first trader said, noting that the strong demand was evident.

“As anticipated, the RTB offering of the government is a big hit even as it’s just the price-setting date and the start of the offer period. This is a great outlet for new and existing investors that seek a safe investment with a higher yield vis-a-vis most banks’ deposit rates,” the second trader said.

Rising inflation prompted the Bangko Sentral ng Pilipinas (BSP) to tighten monetary policy. It has raised policy rates by a total of 175 basis points since May this year.

The government, then under the Duterte administration, raised P457.8 billion from the issuance of five-year RTBs in March. The RTBs had a coupon rate of 4.875%. Of the total amount, P457.4 billion raised was fresh funds or “new money,” while the remaining P259.5 million was from the bond exchange program.

Since the first issuance of RTBs in 2001, the government has generated P4.37 trillion from the bond offerings.

A mobile application by the BTr is also available in the App Store and Google Play Store.

“Through these innovations, overseas Filipinos from over 41 countries contributed to the success of the last retail treasury bond tranche. We will continue to develop these platforms and harness current technologies, such as blockchain, to strengthen the efficiency and inclusivity of the government’s securities market,” Mr. Diokno said.