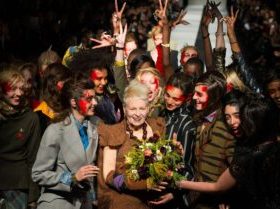 Vivienne Westwood: How the brand will maintain the spirit of transgression and rebellion after her death

If there’s anything that the Nets’ current situation shows, it’s that timing can make or break any potential deal. Back in June, they were all too ready to deal mercurial star Kyrie Irving, but at the right price — with the operative word “right” evidently not carrying a common meaning to them and to prospective partners. For instance, they appeared willing to get a deal done with the Lakers had the latter been willing to part with two first-round draft choices along with former Most Valuable Player awardee Russell Westbrook. Because the purple and gold balked at the second pick, however, any possible arrangement was scuttled. Now, it seems they’re bent on keeping him, and to the point of telling it to all and sundry.

No doubt, the Nets’ decision to keep things the way they are stems from their inability to move all-world Kevin Durant at their desired price. Regardless of the source of the news, they’re asking for the moon, the stars, and the sun in exchange for their franchise player — never mind that he’s an old 34 who already went under the knife due to an Achilles’ tendon injury. True, he has retained the capacity to put up big numbers. On the other hand, the question isn’t his skill set; it’s whether he will be able to take to the court with the consistency would-be employers require of him.

And therein lies the rub. Because Durant’s projected exit has hit a snag, Irving’s own takes a back seat. At this point, it’s clear that the Nets would rather keep them both rather than accept pennies to the dollar for them. That said, they’re taking an enormous risk in so doing. It’s bad enough that they’re latching on to two erstwhile vital cogs who want nothing more than to leave them. The message it sends is that they’re desperate. After all, there is also the danger of settling for the status quo — of accepting less-than-stellar effort from their supposed stalwarts.

Indeed, it’s hard to blame the Nets for trying to make the most out of a mess that was not of their own doing. Then again, they need to be cognizant of diminishing returns; with both Durant and Irving wanting out, the market is effectively depressed. Also, who would want disgruntled leaders? In other words, they’re in for a long season no matter what  they do; the only difference is how much faster they’ll be able to move on.