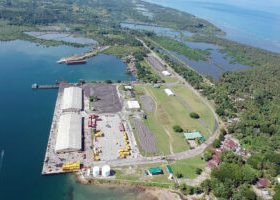 THE PHILIPPINES is seeking $4.14 billion worth of program loans from its foreign development partners next year to fund initiatives on education, social protection, tax reform, healthcare, climate change, and financial inclusion.

Documents for the proposed 2023 national budget showed the government is planning to tap the Asian Development Bank (ADB) for an additional $2.84 billion to finance five proposed programs in 2023, as well as the ongoing Secondary Education Support Program (borrowing $42.5 million) set to finish in 2024.

Previously, the bank said its lending program to the Philippines averages $3 billion a year until 2024.

The ADB has 28 active loan programs worth $8.33 billion in the Philippines, in areas like infrastructure, local economic development, and human capital.

Meanwhile, the country is also seeking a $400-million loan from the Asian Infrastructure Investment Bank next year. The loan will fund a post-COVID-19 business and employment recovery project by the Department of Social Welfare and Development.

The Philippines is also eyeing a $57.21-million loan from the Agence Francaise de Developpement for the subprogram three of the Inclusive Finance Development Program of the Department of Finance.

Program loans account for 39.6% of the proposed total gross external borrowings for 2023. The rest is composed of project loans, as well as bonds and other inflows, which account for 12.5% and 47.9%, respectively.

The government will borrow from local and external sources to help fund a budget deficit capped at P1.45 trillion next year, equivalent to 6.1% of gross domestic product (GDP). As a lower middle-income economy this year, the country has access to concessional loans of its development partners.

“This year, we will continue this pairing mix by obtaining 75%, or around P1.65 trillion from domestic markets, to insulate the country from foreign exchange volatilities resulting from ongoing global uncertainties,” Finance Secretary Benjamin E. Diokno said at the launch of the 28th tranche of retail Treasury bonds on Tuesday

The National Government’s outstanding debt is projected to hit a record P14.63 trillion by the end of 2023, with principal payments set at P1.6 trillion the same year.

Of the total debt, 31.9% or P4.67 trillion will be sourced from external sources, according to the latest Budget of Expenditures and Sources of Financing report.

In 2023, additional borrowing is expected to total P2.77 trillion, with external creditors accounting for 20% of that year’s debt stock.

Outstanding debt is expected to rise to P13.43 trillion by the end of 2022 from P12.79 trillion recorded in end-June, with additional borrowing seen at P2.73 trillion and principal repayments at P1.27 trillion this year.