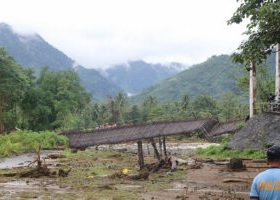 GILAS Pilipinas U18 secured an outright quarterfinal berth after trampling Qatar, 77-61, in the FIBA U18 Asian Championship at the Azadi Basketball Hall in Tehran, Iran.

Mason Amos, the Filipino-Australian recruit of Ateneo, once again impressed with 19 points and seven rebounds after sizzling for 26 in Gilas’ easy 112-48 win over Syria the other day.

Jared Bahay, the U16 team leader before being promoted to join his seniors, chipped in 15 markers as all but one player scored for Gilas in a scattered attack.

Both teams claimed the playoff tickets from their pool but were still to battle last night for the Group C leadership.

Gilas started slow and stared at a 34-35 deficit at the break before clamping down on defense by limiting Qatar to 13 points each in the last two quarters for the 16-point victory.

Under the tutelage of Josh Reyes, Gilas is eyeing to replicate or surpass the Final Four finish of the last Philippine U18 team in the 2018 Asian tilt led by now men’s team stalwart Kai Sotto. — John Bryan Ulanday