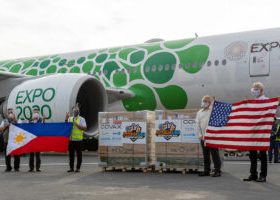 US to donate $5M to boost PHL COVID-19 vaccination campaign

EUROPE has been burning. As a brutal drought and record-breaking heat gripped the continent this summer, crops withered and forest fires raged. Thunderstorms have been cooling things off but are not expected to end the drought and may even create new problems of their own: flash flooding and falling trees.

The apocalyptic weather is not without precedent, as the reemergence of centuries-old “hunger stones” in the continent’s river beds attest. But as climate change makes such crises more frequent, it’s worth remembering an important point: Historical episodes of meteorological mayhem have sown chaos, fueling everything from social unrest to pandemics.

Consider the drought that hit central Europe in AD 69. The Roman historian Tacitus remains our best source on this disaster. He wrote that the legions sent to deal with the restive German tribes that year were in a “bad temper” because “the Rhine [was] scarcely navigable by reason of a drought unprecedented in that climate.” This explained the soldiers’ other grievances: “want of pay and food.”

Tacitus reported that the superstitious Germans “construed the scarcity of water” as evidence that “the very rivers, those ancient safeguards of the Empire, were deserting us” on account of “the anger of the Rhine God” toward the Romans.

And judging from what went down in Rome in AD 69, the Rhine God was angry indeed. That was the infamous “Year of the Four Emperors,” when ill-fed legions joined a civil war between the different factions vying for supremacy in Rome. The soldiers in Germania threw their lot with a portly contender named Vitellius, who was eventually overthrown after a bloody battle. Vitellius ended up dead, as did tens of thousands of civilians and soldiers alike.

The relationship between bad weather and mutinous soldiers was not restricted to this particular episode. In 2018, an economic historian compared data on weather in ancient Rome with the assassination of Roman emperors. He found a strong statistical correlation between droughts in northern frontier provinces and assassinations of emperors back in Rome. Caveat imperator!

Other studies of climate in ancient Rome have suggested tantalizing, if speculative, links between drought-induced famine and subsequent outbreaks of disease, such as the Plague of Justinian. Bad weather may have sowed the seeds of famine, leaving behind a population vulnerable to the predations of a novel pathogen.

The hypothesis that extreme weather can pave the way for pandemics has also been invoked to explain the severity of the Black Death. In the 1330s, anomalous weather events left Europe devastated and malnourished. Different groups of researchers have argued that the resulting poor harvests left the region’s population especially vulnerable to Yersinia pestis, the bacterium that ravaged the region beginning in 1341.

A little more than a century later, another bout of extreme weather generated entirely different problems. After several years of brutal heat in the early 1470s — what one Belgian chronicler referred to as “an unprecedented and anomalous drought [that] afflicted the whole world” — rivers dried up, crops failed, and many people went, well, crazy. In Spain, political leaders blamed the “conversos” — Jews who had converted to Christianity — for the bad weather and burned them at the stake. It was neither the first nor last time that bad weather begat antisemitism.

What was arguably the worst “megadrought” of the past millennium played out the following century in the summer of 1540. Rivers, springs, and wells dried up. Lake Constance, one of Europe’s deepest and largest lakes, lost so much water that people walked to former islands.

Temperatures must have been excruciating. In France, townspeople huddled in cellars not long after sunrise, hoping to escape the heat. One French chronicler noted that the wine grapes were “roasted and the leaves of the vines had fallen to the ground like after a severe frost.”* Throughout the continent, forest fires erupted, much as they have now. A Swiss account from late July 1540 reported that it was “unbearably hot [with] everybody complaining of water shortages. Forests were burning everywhere around.”

Buildings burst into flames as well. Thanks to the meticulous record-keeping of the Germans, we know that 1540 enjoys the dubious distinction of witnessing more fires in towns than any other peacetime year since 1000 AD. Judging from the anecdotal evidence in other countries, Germany was hardly alone.

The fires lent the sky a ghoulish glow, with many observers reporting that both the sun and moon were wreathed in a blood-red aura. Though many centuries had passed since the time of Tacitus, the Germans and other Europeans greeted these signs with similar superstition, viewing them as portents of evil. Many people soon became convinced that hordes of murderous arsonists — “Mordenbrunner” — were setting the fires.

Climate change has ushered in a new era. Beginning in 2003, Europe has sustained a number of crushing heat waves and droughts, with 2022 arguably the worst on record. The historical record would tell us to watch out: Extreme weather, whatever the cause, leaves chaos in its wake. That’s cold comfort indeed.

*There were some upsides. When winemakers pressed the desiccated fruit, they ended up with a potent beverage closer to sherry than regular wine. It apparently got people drunk quickly. There was much rejoicing.