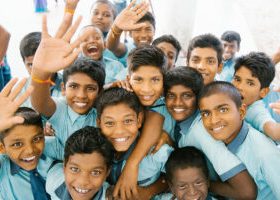 Young India had better get ready to grow old

People line up to file their income tax returns at the Bureau of Internal Revenue office in Intramuros, Manila, April 18. — PHILIPPINE STAR/ RUSSELL A. PALMA

THE COUNTRY’S main revenue agencies are tasked to collect P3.436 trillion in taxes and duties in 2023 to help finance the record P5.268-trillion national budget and reduce the fiscal deficit.

Next year’s collection goal for the Bureau of Internal Revenue (BIR) and Bureau of Customs (BoC) is 10.34% higher than their P3.11-trillion goal this year.

This will make up 99.19% of the projected P3.464-trillion total tax revenues next year, based on the Budget of Expenditures and Sources of Financing (BESF) report.

This will mostly be composed of taxes on net income and profits (P1.295 trillion), taxes on domestic goods and services (P1.073 trillion), and taxes on property (P15.218 billion).

Tax reform measures such as Corporate Recovery and Tax Incentives for Enterprises (CREATE) Act, Tax Reform for Acceleration and Inclusion (TRAIN) Act and Financial Institutions Strategic Transfer (FIST) law will generate P67.07 billion for the BIR and BoC next year. However, this is 37% lower than the P101.42-billion revenues expected this year.

Under TRAIN, the BoC is expected to raise P155.65 billion next year, mainly from the excise tax on petroleum products.

However, the BIR will see a P185.29-billion loss in the collection of personal income tax next year due to the TRAIN law.

The BIR also anticipates a loss of P115.01 billion due to the reduction in corporate income tax, VAT, and percentage tax under the CREATE law.

Sin taxes on tobacco products, sugar sweetened beverages, and alcohol are expected to generate P66.99 billion in 2023, 28% up from this year’s targeted collection.

A P2.9-billion loss is expected from the FIST law next year.

BORROWINGSMeanwhile, the government has set its gross borrowing program for 2023 to P2.21 trillion, just 0.22% lower than this year’s borrowing plan, as it aims to reduce the budget deficit from 7.6% of gross domestic product (GDP) this year to 6.1% next year.

Despite the projected lower borrowings, the National Government’s outstanding debt is still expected to reach P14.63 trillion by the end of 2023, with principal payments set at P1.6 trillion the same year.

On the other hand, gross local borrowings are set to increase by 0.19% to P1.654 trillion next year from P1.65 trillion this year.

The government runs on a budget deficit as it spends more than the revenue it generates. — Diego Gabriel C. Robles