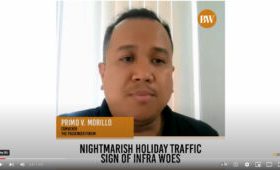 THE Philippines is running late with its regulatory preparations for a safe nuclear power transition, the head of the Senate energy committee said.

Senator Rafael T. Tulfo said a law is needed to lay down standards for the incorporation of nuclear power companies, the construction of power plants, and the their operation.

“We have not even made a first step and we’re overdue,” he told BusinessWorld in a Viber message.

Safety standards are needed because the Philippines sits astride an area of high tectonic activity, he said, adding that disaster response capacity must be developed should anything go wrong with such plants.

According to the World Bank, the Philippines is vulnerable to earthquakes, volcanic eruptions, tropical cyclones, and floods, making it one of the most disaster-prone countries in the world.

“In regulating the nuclear energy sector, there must be stringent standards as to the minimum standards for facilities, minimum qualifications for the persons or entities operating it, considerations as to where and how to acquire nuclear material, contingencies in case of emergency scenarios, proper standards on nuclear fuel disposal, limitations on foreign influence in the nuclear industry, and how the LGU where the plant is situated should gain a just and equitable share of the plant’s profits,” he said.

Center for Energy, Ecology, and Development Executive Director Gerry Arances told BusinessWorld in an e-mail that it would take years to create a policy framework thorough enough to take into account all safety, environmental, and electricity price risks, and years more to build nuclear facilities.

“Even small modular reactors would take about three to five years to construct. That means nuclear energy cannot provide immediate solutions to today’s energy crisis. In that span of time, renewable energy facilities could already have been deployed,” he said.

Nuclear power, Mr. Arances said, is not a solution to the climate and energy crises, adding that it does not guarantee lower electricity prices.

“The price of fuel for nuclear energy like plutonium and uranium, neither of which can be sourced domestically, will put Filipino consumers at the mercy of global market prices and vulnerable to shocks,” he said. “We are already seeing this today with fossil fuel volatilities triggered by the Ukraine-Russia war.”

“In developing nuclear power, the Philippines will devote time and energy to figuring out where we can source nuclear fuel, how we will manage nuclear waste, and how we can prevent the possibility of our country turning into the next Fukushima or Chernobyl,” he added.

Even then, he said there is no assurance of eliminating the risk of nuclear accidents, given the country’s geographic location and the intensifying climate crisis.

“Just last month, we saw the impacts of a 7.1 magnitude earthquake (which) should serve as a warning. Exposure to unpredictable seismic events should make us think twice about having a nuclear power plant,” he said.

There were 10 deaths from the magnitude 7 earthquake that struck the northern Philippines, with more 300,000 people from about 82,000 families affected, according to the National Disaster Risk Reduction and Management Council.

The earthquake also damaged more than 21,000 houses, 302 of which were destroyed, the agency said. Damage to infrastructure was about P414 million in the Ilocos region, Cagayan Valley and Cordillera Administrative Region.

Mr. Arances said time and effort should instead be channeled to effecting a 100% transition to genuinely sustainable and safe renewable energy.

“We have an abundant supply of renewable energy just waiting to be developed at an increasingly affordable cost — case in point are the winning bidders of the GEA Reserve prices, of whom the lowest bid is P3.4 per kilowatt hour from solar,” he said.