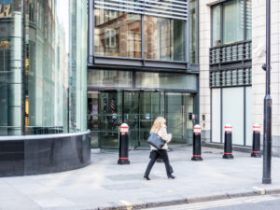 Goldman Sachs to cull 3,200 jobs as part of cost cutting exercise with UK workers to be hit

When we met him at this year’s MaArte Fair over the weekend, Mr. Macasinag was in the middle of a Filipino child’s birthday party. The room at the Peninsula Manila which served as his “booth” was covered in the bright floral plastic tablecloths seen in roadside eateries. Marshmallows and hotdogs on sticks were prominently displayed next to a bright birthday cake covered in rainbow sprinkles. All of these jostled for space with pieces from his graduation collection from the Institut Français de la Mode (IFM), a part of which (a blue garment covering the waist of a model painted blue) was featured in Vanity Fair France.

Despite his education at the world’s fashion capital, it seems as if he’s still influenced by his roots. “Now that I think of it, actually, it’s not a Filipino aesthetic. It’s just things that I grew up with,” he said. He says that the floral tablecloths decorating his booth were inspired by a memory of a similar plastic wardrobe owned by his grandmother. “I guess it’s just a personal thing that I myself am drawn to kitsch elements,” he noted. He contrasts this kitsch with the dramatic, also present in how he was raised. “I guess, with the environment that I grew up in, there the sense of [the baroque]. We see things in a cinematic way.”

“I guess that they’re more personal…[rather] than something that’s national.”

The graduation collection itself is an example of the mixture of these elements. Work for the collection started sometime after the death of his grandfather. In reviewing family photographs, he kept seeing a sculpture depicting the Pieta (a motif in art showing the Virgin Mary holding the body of the dead Jesus Christ). This particular sculpture had been commissioned by his great-grandmother, and was passed down to his grandmother. “If there’s one thing that emblematized family, and was something personal to me, it was the Pieta,” he told BusinessWorld. For his graduation show, a model wearing an ochre garment flounced up like it was the 1700s, wearing a veil and a halo of stars. The model held another model, wrapped completely in yellow. That same ochre garment, trimmed in bright green nylon cords, was displayed at his space at The Pen.

By September, he will be back in Paris for a two-year Master’s degree at the same school. In the future, he would like to spend five to 10 years working in design studios, while maintaining a (limited) made-to-measure line here (he has already dressed celebrities like Pia Wurtzbach and Nadine Lustre). While he plans to set up shop in another country to tap into a more global market, he says, “Of course, I don’t want to stay away from my own roots.”

“It’s about how we take things from our past, from our own history, from the things that we like. Just our own personality and how we convey it into a design vocabulary,” he said, explaining his collection, which he titled “Manifesto.” “I feel like it’s a matter of making clothes more personal. I feel like the idea of making clothes personal gives it more value.”

He counts Japanese designer Rei Kawakubo as one of his influences. This is evident in one of his collections, dresses modified with boning that lands on the body to give it a waving shape. An artist from a famed artistic family was choosing between one in black jersey and another in green lace at the MaArte booth. Rei Kawakubo made garments that similarly artistically distorted the body. “I feel like she really gave me a new perspective on clothes. Now, the idea of clothes as Not-Clothes, or clothes as Object are things that I constantly think about in my work,” he said.

Mr. Macasinag told us what a Paris education in fashion gave him that he couldn’t get anywhere else. “Craft, for one.”

“It’s so cliché, but the vibrance of life, the daring to do things, that’s something that I don’t often see here. Having that grit, having that daring, being able to wear something like this and not caring,” he said.

He himself was wearing something like a plastron, heavily beaded, trimmed with Philippine centavo coins, decorated at the solar plexus with a jade and pearl pendant capping a T’boli brass charm. He made that for his mother to wear at her wedding anniversary.

“There are people who don’t really want to take you seriously. To contrast that, it’s just a matter of doing good things, whether workwise of things in general. I did experience that when I was a bit younger, but now I feel like there are people who actually believe and support and listen to what I do have to say,” he said.

On the advantages of being young, it’s just about not giving a flying fig about what others think.

“I don’t know if it’s really about youth, or if it’s my own personality. I personally don’t feel like I’m necessarily attached to what other people are supposed to think of me. Maybe it’s a sort of rebelliousness that comes with youth, but I don’t want to attach it to that also. I guess it’s also a sense of freedom. That’s the most important thing about designers that are supposed to be young,” he said.

A teacup was hanging around his neck on a black gauze ribbon. “I just found it funny to wear a two-year-old teacup,” he said.