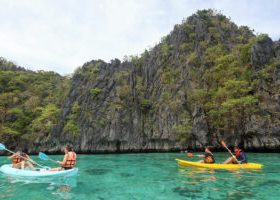 PEOPLE flocked to the Department of Social Welfare and Development’s Dagupan City office on Saturday for cash aid. — DAGUPAN CIO

THE PHILIPPINE government should coordinate with local authorities after chaos marred its aid payout to poor students, experts said at the weekend, amid spiraling oil and food prices.

The government has not learned from its experiences during the coronavirus pandemic, Maria Ela L. Atienza, a political science professor at the University of the Philippines, said in a Viber message. “No clear lessons have been learned from it and previous crisis situations.”

Tens of thousands of students and parents trooped to offices of the Department of Social Welfare and Development (DSWD) nationwide at the weekend to claim their cash aid. Many of them went home with nothing, while at least one stampede was reported in Zamboanga in the country’s south.

The aid is limited to three students per family, which can get the financial assistance on Saturdays from Aug. 20 to Sept. 24.

The Social Welfare department admitted failing to coordinate with local governments for the cash aid distribution. Social Welfare Secretary Erwin T. Tulfo apologized for the mess at the weekend. He told a news briefing he wanted his agency to directly give the money and avoid selective aid.

Ms. Atienza said the Local Government Code of 1991 and other laws mandate coordination between the central and local governments, as well as other agencies.

“That is the essence of decentralization and multilevel governance,” she said. “If the problem is patronage at the local level, there are accountability mechanisms to avoid these and proper guidelines should be formulated.”

Ms. Atienza said since the funds involve education aid, the Social Welfare department should have coordinated first with the Department of Education and Commission on Higher Education.

In Zamboanga City, about 5,000 people showed up in front of a school where the aid was distributed, causing a stampede that hurt 29 people.

The victims, aged 16 to 58 years, had been waiting in line for a chance to receive the aid since Friday evening, the Zamboanga City Medical Center’s Public Affairs Unit posted on Facebook.

Zamboanga City Mayor John M. Dalipe in a statement said they were “ready and willing to support and provide necessary resources to ensure the well-being of the beneficiaries.”

In Manila and nearby areas, authorities had to use riot police to prevent people from storming offices of the Social Welfare department. “Public services require the coordination and cooperation of the National Government and local government units,” policy analyst Michael Henry Ll. Yusingco said in a Facebook Messenger chat. “The president himself alluded to this in his first state of the nation address. And it’s surprising that his administration seems to be struggling with this.”  “If they don’t recalibrate their governance paradigm, then fiascos like this one will be repeated.” Mayors in several cities have suggested alternative procedures in the release of the cash aid. Iloilo City Mayor Jerry P. Treñas said DSWD should consider a school-based distribution system. “If the reason of DSWD is to avoid going through the LGUs, the financial assistance can be coursed through the schools. It will be easier and more convenient,” he posted on Facebook on Saturday.

Earlier in the day, the mayor scolded the DSWD regional head over what he called a “terribly planned event” at the Iloilo Sports Complex.

“If there will be students who will be harmed I will be filing criminal and administrative cases against all responsible for this poor planning and execution,” he added.

In Dagupan City, Mayor Belen T. Fernandez offered to provide the local government’s list of poor households. She also offered the city’s plaza for the distribution.

Ms. Atienza said the poor claimants should not be blamed for the chaos. “Government officials and personnel are there to be in the service of the people. They operate and use funds from people’s taxes. Even poor people pay taxes, mostly indirectly because of value-added tax and other additional taxes imposed on goods they buy,” she said.

“People, whether rich or poor, should be treated equally, she said. “Everybody should be treated with dignity. If there are limited funds, priority should be given to those genuinely in need.”  Ms. Atienza also urged people to know “their rights and responsibilities” and learn to demand accountability and improved services.

“During failures of leadership, government leaders should be reminded that the buck always stops with them,” Terry L. Ridon, former head of the Presidential Commission for the Urban Poor, said in an emailed statement.

Most schools are set to open classes on Monday. The Philippines is one of the last countries in the world to resume face-to-face classes, which experts said has affected student and labor quality.

More physical classes are expected by November, and experts have said the public transport sector is not prepared to face an expected increase in demand.