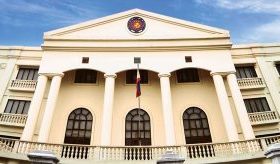 WORLD No. 3 pole vaulter EJ Obiena will have a busy few weeks on the European circuit starting with the Srabhochsprung meeting Tuesday in Jockgrim, Germany.

It was one of the seven competitions lined up by the World Championship bronze medalist at the resumption of his quests to break the Asian and national marks of 5.94 meters, breach the 6m plateau and deliver the country its first Olympic podium finish since Miguel White’s 400m hurdles bronze in the 1936 Berlin Games.

After Jockgrim, the Southeast Asian Games gold winner will compete in Lausanne, Switzerland for the Athletissima Thursday, return to Germany for the Leverkusen True Athletics Classics Sunday and drive to nearby St. Wendel for the City Jump on Aug. 31.

Mr. Obiena will then travel to Brussels, Belgium for the Memorial van Damme on Sept. 2, move back to Germany in Berlin for the ISTAFF 2022 on Sept 4 and cap his European sojourn by competing in Schaan, Liechtenstein’d Golden Fly on Sept. 11.

“Pray for my poles for each travel,” said Mr. Obiena.

Mr. Obiena vaulted 5.94m at the Worlds in Eugene, Oregon a month back, setting a new Asian mark and sealing a historic bronze in the biennial meet.

Mr. Obiena is also expected to come in more motivated after ironing out matters with the national team, where he regained his old spot after several months of being excluded. — Joey Villar