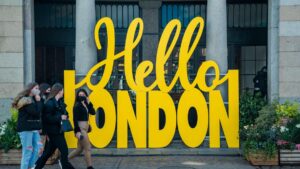 The UK economy will grow even faster than that of the United States this year as the vaccine programme delivers the speediest recovery since the war, Goldman Sachs has forecast.

The projection by the Wall Street bank comes after a string of economists’ upgrades for Britain and a prediction of “very rapid growth at least over the next couple of quarters” by Ben Broadbent, deputy governor at the Bank of England.

In a note to clients, Goldmans said that it expected British GDP to grow by a “striking” 7.8 per cent this year, “above our expectations for the US”, which it estimates will increase by 7.2 per cent.

The forecast, which suggests the fastest growth since militarisation at the start of the Second World War, is surprising because President Biden’s $1.9 trillion stimulus is a multiple of Britain’s package even after adjusting for the size of the economy.

Recent upgrades by independent economists suggest a sharp change in Britain’s fortunes. Last year, the economy shrank by 9.8 per cent, the worst recession of all G7 advanced economies. The International Monetary Fund has said that Britain will not return to pre-pandemic levels until 2022, months after America, but that assumption was based on growth of 5.3 per cent this year. Since its forecasts were published this month, activity has outperformed.

Up-to-date economic indicators also suggest that the economy has been more resilient than previously feared and the success of the vaccine programme is raising hopes that people will start spending the £150 billion of “accidental” savings they built up during successive lockdowns.

First-quarter GDP shrank less than feared during lockdown and retail sales and business activity have been better than expected since the economy started to reopen.

“The UK economy is rebounding sharply from the Covid crisis. The April flash PMI was much stronger than expected in the UK, with the services PMI moving strongly further into expansionary territory,” Goldman Sachs said.

“Combined with other recent metrics, including a 5.4 per cent jump in retail sales, our current activity indicator is now running at an annualised pace of 7.1 per cent. Given recent upward revisions to real GDP, our 2021 forecast is now at a striking 7.8 per cent for 2021, above our expectations for the US and sharply above the Bloomberg consensus of 5.5 per cent.”

At the weekend Broadbent predicted “very rapid growth” and that households may spend more than 5 per cent of the £150 billion of savings, the assumption underpinning the Bank’s forecasts.

The EY Item Club, a forecaster that uses the same economic model as the Treasury, upgraded its GDP growth forecast for this year from 5 per cent to 6.8 per cent. A separate consumer tracker produced by Deloitte showed that every measure of consumer confidence had increased and that the UK was “primed for a sharp snapback in consumer activity”.

Deutsche Bank is forecasting UK growth in the three months to June to be “over 5 per cent”.