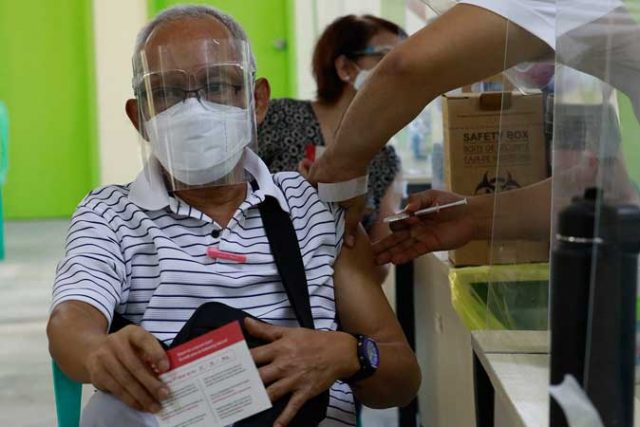 THE inter-agency task force handling the coronavirus response has included more sectors in the fourth priority group for vaccination, according to the presidential palace, but when they will get the jab remains uncertain.

Frontline workers in the transport sector, news media, wet and dry markets, several government agencies, and migrant Filipino workers are now among those eligible to be vaccinated under the A4 group of the coronavirus immunization program, Presidential Spokesman Herminio L. Roque, Jr. said in a statement on Friday.

Others in the group are personnel in basic and higher education institutions, religious leaders, workers in the justice sector, security and social protection sectors, among other government employees.

The A4 group is in line after the inoculation of health workers, seniors, and people with comorbidities.

Health Secretary Rosario S. Vergeire, in a virtual briefing Friday, said there is no schedule yet for the inoculation of the A4 group as this will depend on the availability of supply.

“The schedules for this, the specific timelines, aayusin pa namin ito kung paano natin gagawin at kung kailan ito mangyayari (we will still make arrangements on how this will be carried out and when),” she said.

Health authorities earlier urged concerned agencies to begin issuing a certificate of eligibility to individuals in the A4 Group to prevent delays once the vaccines become available.

The country has so far taken delivery of a combined 3,025,600 doses of the CoronaVac and Astrazeneca vaccines, of which 93% have been distributed.

All these are allocated to the first three priority vaccination groups.

Meanwhile, a group representing families of political prisoners is pressing the national government to release a schedule for the vaccination of prisoners.

“A vaccine schedule is the only way to concretize the assurance given to us by the Department of Health that ‘all persons deprived of liberty as determined by BJMP (Bureau of Jail Management and Penology) and BuCor (Bureau of Corrections), are included under the Priority Eligible Group B-9,’ and to thereby correct the avoidable confusion caused by the DOJ (Department of Justice) Secretary,” Fides Lim, spokesperson of the group Kapatid, said in a press release on Friday.

The B-9 group follows a still long list of other priority groups, with the vaccination program currently still attending to the A1 to A3 groups, which cover health frontliners, senior citizens, and persons with comorbities.

Justice Secretary Menardo I. Guevarra told reporters on Friday that prisoners have not yet been included “as they are not front liners.”

Mr. Guevarra added that the final classification for categories B and C have yet to undergo discussion by the national task force.

In another development, healthcare experts from the Philippine Foundation for Vaccination, Philippine Medical Association, and the Pharmaceutical and Healthcare Association of the Philippines said the public should remain vigilant against the symptoms of the common flu.

In a statement on Friday, the groups said influenza is a viral infection similar to that of coronavirus disease 2019 (COVID-19) and vaccines to prevent the former have been around for decades.

“With the synergy of epidemic and seasonal diseases, the best time to get vaccinated from the flu is now especially when the symptoms of influenza and COVID-19 overlap,” Asian Pacific Society of Respirology – Tuberculosis Assembly Head-Elect Dr. Jennifer Wi said.

While the vaccine does not prevent COVID-19, it still stands as a preventive measure against most diseases, the doctors said.—Kyle Aristophere T. Atienza, Gillian M. Cortez, and Bianca Angelica D. Anago