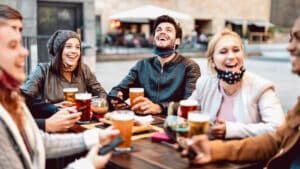 Pubs and restaurants in England that opened on Monday sold twice as many drinks as they did before the coronavirus pandemic struck, according to figures charting Britain’s rush for the first socially distanced pints of spring.

While the majority of venues remain closed due to a ban on indoor service, those that did welcome guests appear to have prospered from pent-up thirst.

One pub boss spoke of “Christmas trading” as venues with beer gardens and outdoor terraces enjoyed higher-than-average sales for a Monday in April, despite snowy weather across parts of the country.

Overall sales at 1,687 licensed premises monitored by the CGA Drinks Recovery Tracker were 58.6% higher than they were for the equivalent day in 2019, the last comparable date before the pandemic took hold.

While food sales were down 11.7%, demand for the first meet-ups in pubs and restaurants for more than three months meant that drinks sales more than doubled, rising 113.8%.

While the figures offer encouraging signs for the recovery of the hospitality sector, the data only covers a relatively small portion of venues that were open. Only 38% of venues monitored by the CGA, about 41,000 premises, have outdoor space. Not all of those were able to open.

The chief executive of the British Beer & Pub Association (BBPA) also pointed to the fact that most had remain closed, with only 40% of pubs, about 15,000 premises, able to open – and at reduced capacity.

“Whilst many have gone back to their local for a pint, it’s not all roses in the pub beer garden,” said Emma McClarkin.

“Even though they seem full, the reality is pubs are operating with just 20% of the space they’d usually have … It is for this reason we need pubs to open indoors and out as soon as possible and the restrictions to be removed to allow us a chance at trading viably and making any kind of profit.

“With so few tables and spaces available in pubs for outdoors service only, we implore people that if they can no longer make their booking, notify the pub so they don’t miss out and someone else can get the table instead.”

Pubs, bars and restaurants are due to be allowed to serve customers indoors from 17 May, having suffered more than almost any other industry from coronavirus.

S4Labour, which provides software services to more than 2,000 hospitality businesses, said its customers’ combined sales were higher than 2019, even including those that were shut.

The company pointed out that the increase was achieved despite the fact that many venues woke up to find their outdoor spaces covered in snow, whereas the equivalent Monday in April 2019 was sunny and warm.