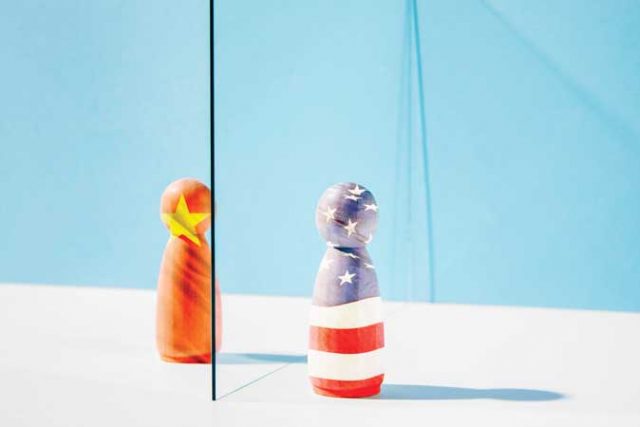 NO ONE disputes the reality of the strategic competition that has blossomed between China and the United States. But experts disagree on whether this contest will rise to the global reach and the comprehensive scope of the Cold War, when the US and the Soviet Union led opposing economic and political systems defended by their respective, globe-girdling security alliances. China is a regional Asian power with hardly any treaty allies. It is also the biggest beneficiary of the international, rules-based liberal order and the global market that has promoted its phenomenal economic growth.

With a swarm of Chinese naval vessels in the West Philippine Sea, the issue is of more than academic interest for the Philippines. Academic historian Niall Ferguson was among the earliest to announce around 2018 that Cold War II had already commenced. This was a striking conclusion from the co-author (with Moritz Schularik) of a 2007 article that had coined the term “Chimerica” to describe the mutually beneficial relationship between China and the United States. By pegging its currency to the US dollar and investing the massive profits generated in the global market in US securities, China was able to keep the value of the renminbi low and its products competitive. American business benefited from lower interest rates and consumers from lower prices for goods.* Chimerica suggested an enduring, warm, and cozy relationship unlikely to chill into a Cold War.

But the authors’ pun on chimera, the mythical monster with the head of a lion, the body of a goat and the tail of a serpent, already anticipated the authors’ conclusion two years later — Chimerica was an unsustainable illusion destined to end.** The US-China symbiosis was damaging to their trading competitors. More critically, it exposed the partners to risks that both would rather avoid. China has accumulated in its war chest about $4 trillion in reserves. While the amount makes US policy makers uneasy, it is also worrisome for the Chinese to have so much of its resources vulnerable to US actions.

It seems reasonable to accept Ferguson’s dating of Cold War II, when he reports both Washington, DC and Beijing officials telling him that they are already engaged in such a conflict. Biden’s Interim National Security Strategic Guidance, issued in March, has settled the issue. The document identified the comprehensive range of issues — diplomatic, military, economic, technology, information — over which the US resolved to compete. More significantly, it framed the competition in ideological terms, in the context of a “historic and fundamental debate about the future direction of our world.” As in Cold War I, the choice on “the best way forward,” was between autocracy or democracy.***

Xi Jinping had grasped the ideological foundation of the clash with the United States much earlier than Biden. Sinologists have gathered from Xi’s communications to the party faithful since his ascent to power in 2012-13 on the continued relevance and correctness of the Marxist Leninist view of history and the inevitable decline of Capitalism and the eventual triumph of Socialism it foretold. American mismanagement of the coronavirus pandemic and the turbulent transition into the Biden presidency have further reinforced this narrative.

At Davos in late January, Xi Jinping was content to lobby European officials and businessmen to resist the American move to “decouple” Chimerica. While promoting business with China, he warned foreigners to respect the red lines protecting Chinese core interests in Tibet, Xinjiang, Hong Kong, and Taiwan.

In March in Anchorage, Alaska, at the first top-level meeting between officials of the Biden Administration and the People’s Republic of China, Yang Jiechi, Director of the Central Commission for Foreign Affairs and Foreign Secretary Wang Yi faced off with National Security Adviser Jake Sullivan and Secretary of State Antony Blinken. As the testy opening statements revealed, the participants had their gloves off. For Asian observers, the session recalled the Cold War I confrontations between the Soviet Union and the United States.****

The reset in US-PRC relations both sides might have thought possible would not come through a roll-back of Trump’s anti-China policies. Apart from Biden’s own democracy advocacy, the Democrats could not show themselves less ready than the Republicans to stand up to China. Nor would the People’s Republic of China (PRC), convinced that it was riding the tide of history, retreat from the sharp power/wolf warrior diplomacy it had been pursuing.

Beyond the atmospherics in Alaska, the PRC aimed to strengthen its “countermeasures and deterrent capabilities.” The PRC sought to establish its position as the dominant center of production of high-tech communications and artificial intelligence products, for the world. To enforce this policy, the PRC also had to reduce its dependence for strategic materials on ideologically unreliable trade partners, like Australia, the source of 60% of its iron ore. Hence, its move to Gambia in Africa for access to the world’s largest untapped iron ore reserves and to the Middle East to protect access to oil from Saudi Arabia and Iran, while also expanding its diplomatic footprint.

Cold War II will make it more difficult for countries to improvise on opportunistic or temporizing, transactional diplomacy that seeks free-riding advantages. This approach will not come without costs. Countries will need to be much more deliberate in crafting a foreign policy strategy that identifies and protects their permanent national interests. Nor can leaders postpone coming to grips with foreign policy challenges that are, admittedly, of a long-term nature, as appears to be the inclination of the Duterte administration.

Matt Pottinger, former White House national security adviser, described the competition with China as a marathon. But to qualify for the long-distance event, runners must qualify by keeping competitive in the 400-meter sprints. Or lose the marathon by default. n

Edilberto C. De Jesus is a Senior Research Fellow at the Ateneo School of Government.