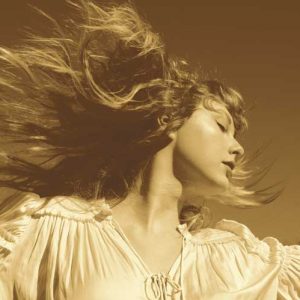 THE BOXES were stacked, and the CDs had to be stored by genre. Set for storage that day were country/folk albums. This writer, then 17 years-old, loaded the box with dad’s collection first. When it was time for my CDs, the first thing I took out was Taylor Swift’s Fearless (2008). Clutching the album, I recalled when I used to listen to it every night while studying as a high school sophomore. I knew I would want to listen to it again once we moved to our new house. Instead of adding it to the box, I kept it in a duffel bag together with my favorite CDs where they have remained in good condition to this day.

The first rush of nostalgia came on Feb. 12 this year when the 11-time Grammy award winning artist released the song “Love Story,” which was specifically called “(Taylor’s version).” The track has its original country-pop sound, but the vocals are brighter. The end of the last note leaves the listener anticipating more.

The reason the song is called “Love Story (Taylor’s version)” is because Taylor lost control over the original versions of her music. So she decided to do them all over again.

When Ms. Swift’s contract with Big Machine Records ended in 2018, she signed with the Universal Music Group which owns Republic Records, the label with whom she recorded her last three albums — Lover (2019), folklore (2020), and evermore (2020). In 2019, music executive Scooter Braun bought Big Machine Records — the record label that owns the master recordings of the singer’s first six albums. Swift has said that she had wanted to buy the masters for years, but was unable to. Big Machine then sold the recordings to the private equity company Shamrock Holdings “for a reported $300 million.”

So, Ms. Swift plans to re-record her first six albums — beginning with Fearless, which was originally released in 2008 — and release the new versions, as a way of circumventing the issue.

Last week, the 31-year-old singer released the album Fearless (Taylor’s version) with 26 tracks — the deluxe edition has a 27th track, “Love Story” (Elvira remix) — featuring the original 13 song lineup, seven tracks from its platinum edition, and a bonus of six “From the Vault” songs. Running for almost two hours, the album stays consistent with its original country-pop production throughout.

Listening to the original lineup for the first time in a decade, the lyrics hit differently. Hearing the chorus of “Fifteen” reminded me of the naive and in love teenager that I was.

When it got to the fourth track, “Hey Stephen,” I was surprised to hear Ms. Swift’s laughter at the break after the song’s bridge, just like in the original.

After listening for over an hour, hoping to spot any significant differences, I broke my silence at the 20th song — “Today was a Fairytale” (originally released in 2010 as part of the soundtrack for the film Valentine’s Day) — and sang along to the chorus with matching harmonies.

The addition of never-before released songs called “From the Vault” is a new treasure Ms. Swift offers her fans.

“One thing I’ve been loving about these From The Vault songs is that they’ve never been heard, so I can experiment, play, and even include some of my favorite artists,” Ms. Swift wrote on Twitter and Instagram on March 24.

The six new songs begin with a mellow country ballad, “You All Over Me” (featuring Maren Morris), followed by the slightly upbeat “Mr. Perfectly Fine.” The album ends with mellow songs with “We Were Happy” and “Bye Bye Baby.” The “From the Vault” tracks showcase Ms. Swift’s storyteller songwriting style, tackling relationships, heartbreaks and slowly recovering from them, and reminiscing about an old flame. The songs would resonate and most likely have been well-loved too had they been released earlier in the singer’s career.

Listening to the re-recorded Fearless album was a comforting treat. This 27-year-old rekindled the enjoyment of listening to the CD while finishing homework. Whether you are a longtime Swiftie or new one, it is worth anticipating what the singer/songwriter has in store in her subsequent re-recordings.